Goodwill vs. Locals: The Walmart Effect Trickles Down to Social Enterprise 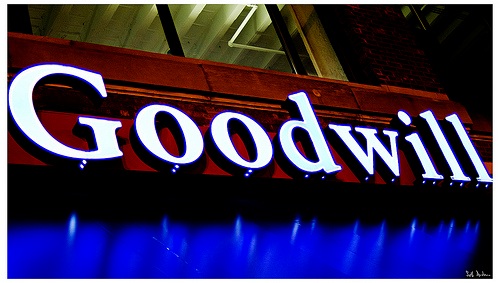 Whether this is a “David versus Goliath” story or a “rising tide lifts all boats” story depends on your point of view. From the outside, it could be any debate about the net costs and benefits of a giant Walmart coming to a small town—but in this case, the players are all nonprofits.

The town is Louisburg in rural North Carolina, with its population of 3,310. The Goodwill Community Foundation of Eastern North Carolina, a Goodwill Industries affiliate with an annual budget exceeding $32 million, has built a new donation/retail center in Louisburg. This, the nonprofit’s 37th such facility, occupies a prominently located, long-vacant former eyesore of a building. GCF spent $1.4 million for renovation and created nine new post-construction jobs. Even prior to opening, it has also brought other resources to the community, including a $20,000 donation to the local Boys and Girls Club. The GCF website claims that its retail prices are lower, and its wages higher, than nearly every other Goodwill affiliate. If its opening day on May 2 is anything like those at other GCF stores, it will draw long lines of customers from hundreds of miles away to spend in Louisburg.

While building and operating stores accounts for the bulk of GCF expenses, the organization (like Walmart) is also a significant grantmaker, with over $2.5 million in cash grants annually (according to its 2011 Form 990) to other nonprofits with aligned missions. So, what’s not to like about GCF? Some local residents are speaking out about three areas of concern.

The first is the direct impact on other thrift stores in the community, especially those that support local nonprofits like Safe Space, a shelter for domestic violence victims, and Volunteers in Medicine, which provides medical care for the uninsured. As in the case where the dynamic of retail enterprise shifted from mom-and-pop stores to “big box” vendors, the Goodwill store could siphon money from smaller operations and reduce earned income for the nonprofits that depend on them. Boyd Sturges, a legal volunteer for Safe Space, predicts, “[t]hey’re going to kill all the little charities.”

The crux of the second concern is that more than half of GCF’s grantmaking benefits charities overseas. For some observers, this represents a net loss of charitable resources for the local community, akin to large corporations like Walmart reinvesting less in the local economy. Volunteers in Medicine’s Beverly Kegley is less worried about losing sales, because she believes her store will attract more local residents when they consider where the revenue is spent.

The third concern is about the mission and focus of GCF under its long-term executive director, Dennis McLain, a Methodist minister who is credited with major turn-around and renewal since joining the organization in 1982. Some core programs that focused on direct training services to disabled populations have been dropped or shifted solely to volunteers. And the executive compensation package of $795,000 annually for McLain and his wife is considered outsized by local standards. Safe Space’s Linda Rudolph observed, “our whole budget is less than what the CEO and his wife are making.” This third concern speaks to the explicit overlay of ethics and equity that characterizes nonprofit activity.

Is this a tale of opaque greed, or entrepreneurial largesse? The arc of this story has yet to be played out, but it’s clear that social enterprise is not going to simplify the strategic choices that nonprofits and philanthropists will need to make in the future.—Kathi Jaworski