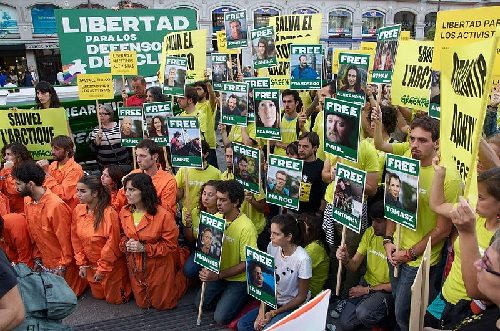 The 30 people who attempted to board an oil platform off Russia’s north coast have had the charges lodged against them by Russia downgraded from piracy to hooliganism. “Hooliganism” is the same charge used in the Pussy Riot case and it carries a maximum sentence of seven years rather than the 10–15 associated with the charge of piracy. (The Pussy Riot case, of course, was seen by many observers as a part of a larger campaign by the Putin government to suppress dissent.)

Greenpeace has promised to contest these new charges against the Arctic 30 also as fantasy charges “wildly disproportionate” to the event and “an assault on the very principle of peaceful protest.”

Vladimir Chuprov of Greenpeace Russia said in a statement, “The (activists) are no more hooligans than they were pirates,” adding that they had “protested peacefully against Gazprom’s dangerous oil drilling and should be free.”

The Investigative Committee retorted that it may still bring additional charges against the activists, and they dismissed the claim that the protest was peaceful, saying, “Anyone who illegally and premeditatedly seizes…a stationary platform is committing a crime, no matter what their motive.”—Ruth McCambridge