Editors’ note: This article, which we ran in the fall/winter edition of the Nonprofit Quarterly in 2013, was posted to this site on December 19, 2013. It was adapted from “Board/Staff Relationships in a Growth Crisis: Implications for Nonprofit Governance,” which itself was originally published online on March 7, 2011, by the Nonprofit and Voluntary Sector Quarterly and subsequently released in NVSQ’s print publication in 2012.1 The authors appreciate Peter Roberts’s extensive editing support for this article.

This article looks at the ways in which board/staff relationships played out in four small cultural organizations—two museums and two performing arts companies—as each passed through three distinct phases of a growth/financial crisis. This research may inform nonprofit boards and managers in a couple of ways:

Our first contact with the four organizations occurred when we were contracted as consultants by government funding agencies that had been asked by all four for “bail-out” grants. This provided an opportunity to engage with the four organizations in this community-academic research project. The research included a questionnaire; organizational documents (grant applications, audited reports, strategic plans, and task descriptions); forty interviews—some open-ended and some focused—with key players; and participation in thirty-four meetings, all told. This research opportunity was quite exceptional considering that organizations in a sensitive crisis tend toward confidentiality, that we had access to a wide cross section of organizational players, and that the study continued over several years.

There were no government representatives on any of the four boards, and organizational membership in three of the four cases was limited to board members. While this may be common in nonprofits of this size, it constrains external monitoring of the board’s governance. For all of the organizations, federal, provincial, and municipal governments were significant providers of operating and infrastructure funding. The organizations were located in small communities in a region without a culture of philanthropy. Private philanthropic support was minimal, and non-governmental income was from corporate sponsorship or from earned income.

Each of the four organizations had responded to positive external recognition by making financially risky decisions to grow, entailing new or additional physical facilities or evolved programming. When increased expenses were not matched by self-generated revenues, staff did not preview cash-flow crises with the board. Instead, anxious external creditors were the whistleblowers. Audited statements prepared for members’ annual general meetings and reports to government funders were only available at year end, providing retrospective financial information well after the crisis had happened. Government funders declined an increase in their support.

Four features appeared across all cases: high artistic quality and reputation, limited financial management, the CEO’s charismatic management style, and various styles of board engagement. Similarly, three phases of the crisis rolled out in each case: before the storm, the crisis trigger, and continued survival.

Before the storm. The organizations’ artistic successes were recognized outside the organization by peers, the public, and funders, providing a halo effect on the board’s perception of the CEO. The typical board/staff dynamic was highly trusting and influenced by the CEO’s charisma and significant psychological power, with “rubber stamp” governance behavior by the board. Board members were disengaged from active, collaborative, and more informed partnership with staff, but were very proud of their association with the organization. Risk assessment of expansion scenarios was hampered by management’s overly optimistic revenue projections, or deferred when financial information was unavailable. Under-resourced or neglected administrative functions limited the information available. In each case, the crisis was triggered by outside stakeholders—private creditors, banks, and suppliers—who were directly sensitive to organizational cash-flow and sustainability issues.

Artistically charismatic executives appear to have used positive press reports to convince boards to undertake projects without having to account financially for their recommendations. Boards passively supported these decisions because there was a lack of information about issues relevant to financial stakeholders. In addition, the organizations had easily obtained operational government funding early in their lives, and they seemed to lack an outside-oriented perspective that the presence of more extensive private fundraising might have brought.

The crisis trigger. This phase was precipitated by legal actions of external creditors who demanded loan repayment or settlement of unpaid bills, or who froze credit. In response to this threat to economic survival, board members snapped into action. They bypassed executive leadership and assumed control, negotiating directly with external stakeholders, seeking temporary extensions with suppliers, additional credit from banks and private lenders, and emergency grants from funders. As board members became preoccupied with financial procedures and efficiency, the CEO’s actions and decisions were challenged. The board’s former confidence and blind trust in the CEO’s competence abruptly changed to distrust. Decisional power shifted from the CEO to the board. Two CEOs were removed, and three board chairs resigned. In the fourth case, the government funder stipulated the addition of external board members to increase monitoring capability. In this phase, governance activity shifted to close oversight, emphasizing an active and engaged board that controlled and distrusted the CEO, reflecting the board’s significant lack of collaboration with the CEO.

However, after the immediate shock of the crisis, it seemed unsustainable to continue the intense level of involvement that the board needed to maintain its preeminent position within the organization and to control its relationship with the outside environment. The organizations entered the third phase of crisis.

Continued survival. This phase was characterized by the organizations’ adjustment to a more balanced and stable operation within constrained circumstances. In this context, the same or new players as board chair and CEO developed relationships, and trust grew; however, distrust did not completely disappear. Craving efficiency, both the board and the CEO sought to establish a more mature and collaborative relationship. Power appeared to be shared more equitably, with an expectation of checks and balances. Transparency became valued. In all organizations, board membership was diversified to improve fiscal monitoring and analysis and to ensure that all activity adhered to the mission. In two organizations, external advisory committees to the board were formed to provide informed stakeholder perspectives and assist with monitoring. The memory of the crisis continues to cast a shadow of distrust, but it is tempered by collaboration, and all is underscored by more proactive stakeholder relationships.

In our study, the dynamics of trust, distrust, or both featured in the governance relationships in each phase. By observing these organizations over an extended period, especially around a growth crisis, we found out how governance behavior can change over time, that board/staff relationships vary according to phases within an organization, and that board behavior does not just depend on organizational type (as regards size, sector category, and other organizational factors). Two previous research studies observed phases around a crisis, but they only had access to retrospective accounts.2 In contrast to those studies, we were in close contact and in direct observation throughout the process.

However, the sudden shifts in power between the CEO and the board continued to puzzle us. 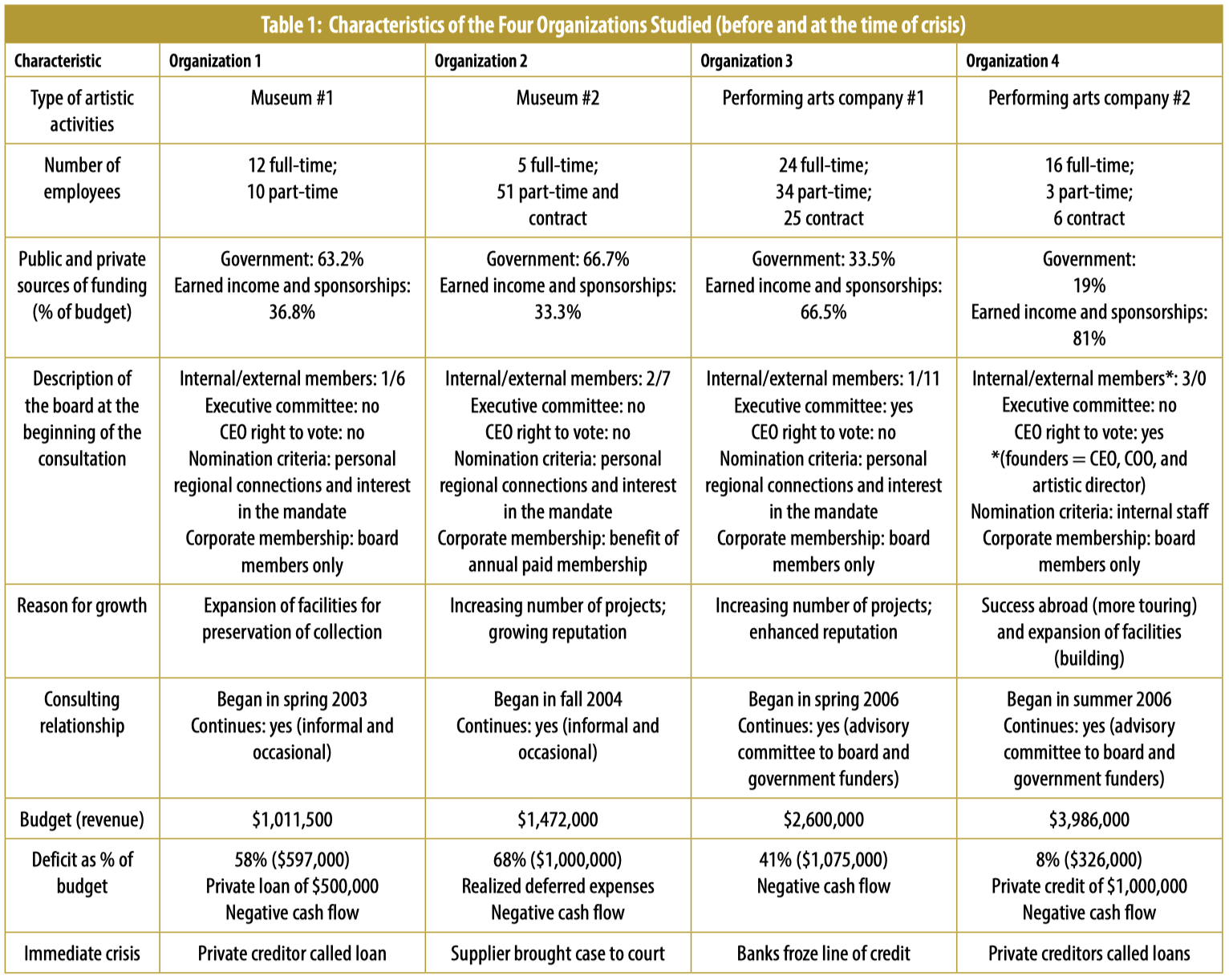 We found answers to our questions in the research on joint venture relationships. That research contrasts the role of trusting collaborative relationships with the controlling role of formal contracts. These relationships are defined by either trust or distrust.3 Situations without a contract that feature a very high degree of trust and no distrust involve a high degree of risk. According to this research, such situations will eventually evolve over time to generate high levels of distrust. “Even trustworthy partners can be relied on to be untrustworthy if the incentives are large enough. . . . Under certain conditions, trust can be harmful, as it encourages actors to suspend judgment of others.”4 “If trust is not accompanied by certain degrees of healthy suspicion or formal controls, an organization risks being cheated or missing out on major opportunities.”5 We found these explanations compelling and perhaps applicable to the changes in behavior observed in our study.

In our first phase, when the CEO enjoyed a high internal and external public profile associated with artistic mission achievements, passive board members trusted staff excessively to make the right decision in a financially risky situation. The CEO’s halo and board members’ own devotion to the mission seem to have distracted the board from demanding or carefully considering pertinent financial data. They suspended the internal control they had available to them. External creditors clearly sensed that promises to pay or repay were at risk of being broken, and they blew the whistle— precipitating a cash-flow crisis. Governments, perhaps piqued by board passivity or suspecting irresponsible commitments, applied their own controls and refused additional funding; this action further contributed to both the cash-flow crisis and a crisis of confidence for the organization’s stakeholders. In the second phase, the board reacted with hyper-engagement by adopting distrustful, controlling behavior, replacing board and executive leadership, and changing governance structures. In the third phase, the board/staff relationship altered yet again because the previous state of hyper-diligence was not sustainable. It became more collaborative, while featuring a balance of trust and control with regular fiscal reporting, analysis, and forecasting.

The joint venture literature uses “expectancy disconfirmation” theory to explain the circumstances in which performance declines compared with expectations.6 The partner loses all trust and takes control to rectify the situation: “This urge to act, or feeling that something has to be done, may translate itself into a heightened level of formal coordination and control.”7 When our nonprofit boards perceived the CEO’s performance negatively after the whistleblowing, and the true financial state was revealed, their reaction to the threat replicated the behavior described by the joint venture research. Boards intervened at an operational level and bypassed the CEO.

However, the boards’ new state of hyper-control and distrust created uncertainty, “causing managers to continually question the motives and competencies of their partners.”8 According to the research, work relationships become inefficient and the partnership deteriorates. Balance is needed to sustain the relationship over the long term.

In our organizations, boards in the second phase found this level of effort and the resulting tension unsustainable. They achieved balance in the third phase by evolving to an improved but still somewhat distrustful relationship, with new leadership, governance structures, and external advisory committees. These changes enabled the organizations to manage their constrained financial situations more knowledgeably and collaboratively, and thus avert further crisis.

and control are both important features of a governance relationship. If armed with a deeper understanding of the dynamics that dominate various phases of a crisis, boards and staff may be better able to partner and to anticipate the pitfalls of passive behavior. Our study provides evidence that both trust and distrust can coexist in a relationship, and together they can promote a productive checks-and-balances style of governance.

From this study of four organizations in a growth crisis, we learned about the changing nature of board/staff relationships that affect governance of nonprofit organizations. The dynamic moved from CEO preeminence and dominance to board-led control, and, subsequently, to collaboration within a paradoxical trust-distrust relationship. Three lessons are important here: First, no single mode of CEO or board predominance was sustainable; internal and external dynamics played together, which generated either long-term latency or sudden and overt change when the crisis occurred. Second, board behavior can be contradictory and can change over time. Third, the dynamics of trust and distrust appear to explain how relationships change from one phase to another in these crisis scenarios. These lessons provide some insight into how boards and managers might consider developing their relationships to better control the disruptive effects of a crisis.

Wendy Reid, PhD, is an associate professor in the Management department of HEC Montréal.

Johanne Turbide, PhD, is a professor in the Accounting department of HEC Montréal. Turbide is also editor of the International Journal of Arts Management (IJAM).