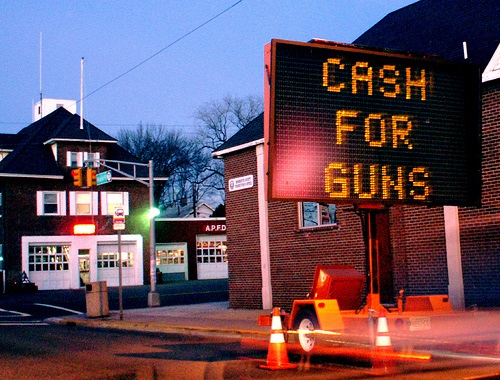 It is so strange that the American movement for gun control has flickered and come close to disappearing despite the ubiquity of gun violence in the U.S. and its resurgence in Western Europe. In liberal Vermont, for example, a bill to require universal background checks seems destined for defeat in the state legislature, admitted Ann Braden, co-founder of Gun Sense Vermont. Even legislation introduced by California Senator Dianne Feinstein at the federal level that would deny people on the federal terrorist watch list access to assault weapons faces difficulties and attracted only Democratic cosponsors in the Senate (although in the House, a similar bill was introduced by Republican Representative Peter King, who agrees with Feinstein that denying people on terrorist watch lists access to flights but allowing them to purchase assault weapons makes no sense).

The pro-gun lobby is feeling its oats, promoting “campus carry” bills around the country that would permit guns on college campuses, which gun advocates like the NRA say could be used to prevent sexual assault. Everytown for Gun Safety, a group founded by former New York City mayor Michael Bloomberg, denounced state legislators in 10 states for promoting campus carry legislation. Supporters’ contentions that guns on campus would deter sexual assault do not differ much from arguments that making guns more widely available would help Americans stand up against jihadist threats. Do gun proponents really imagine shoppers in the Mall of America engaged in pitched gun battles with terrorists? These anti-regulation justifications trotted out by gun supporters are no more than rank opportunism, preying on the fears of women on campus and of most Americans about terrorists hidden among us.

Imagine if the three young Muslims who were murdered in North Carolina, ostensibly due to a fight over a parking space, hadn’t had to deal with a Craig Hicks loaded to the gills with assault rifles. He’d be no less demented, but lacking the ability to pump bullets into their skulls, Hicks might have had to actually talk to them rather than executing them point blank.

But that isn’t the direction American laws are going. In Arizona, legislation is barreling right along to allow for silencers and for sawed-off shotguns. Bills have been introduced in other states such as West Virginia to prohibit the enforcement of federal gun control laws.

The issue of gun control is more than a question of guns alone. Eight nonprofit organizations, including the American Academy of Pediatrics, the American Public Health Association, and the American Bar Association, just released a report calling for universal background checks and an assault weapons ban as a matter of policy to address what they call the “major public health problem” of gun-related injuries and deaths.

It is nothing short of remarkable that in light of all of the gun-related problems of our society, the gun control movement seems so battered.

The fault, as it were, isn’t the responsibility of the gun control advocates who are fighting mightily against the power of the NRA and other like-minded organizations. This one lies at the feet of the broad mass of nonprofits. After the tragedy at Sandy Hook, when the president assigned vice president Joe Biden to lead a national task force on gun violence, that was the moment for the nonprofit sector writ large to come to grips with the nonsensical system in the U.S. that allows assault rifles to be widely available, guns to be purchased with limited or no background checks in many cases, and sales of silencers and sawed-off shotguns. It was a moment for all nonprofits to see gun control as an issue of public health, of social welfare, and of community well-being. For any number of unpersuasive reasons, including but not limited to the White House’s own inability to marshal its resources and reject pressures from red-state Democrats not to pursue the issue, it didn’t happen. Hopefully, the nonprofit sector will take on gun control someday as a public health issue that affects all of us.—Rick Cohen