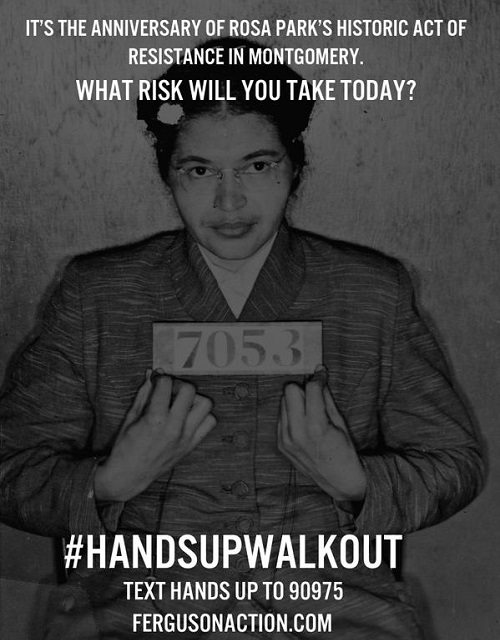 Self-organizing across the United States and around the globe marks a new kind of 21st-century movement. Occupy was like a voluntary franchise of activism; so, too, are these protests over the police killing of Michael Brown and the structural racism that many believe firmly underwrites the pattern. It is not a new phenomenon, but the chord that has been struck refuses to stop resonating.

The New York Times reports that at 12:01 CST yesterday, the 59th anniversary of the arrest of Rosa Parks, young people walked out of high school and college classes in thirty cities across the United States. The walkout which was organized through the tumblr page of the Ferguson National Response Network was well documented in social media.

At Yale, 400 people marched from the university to New Haven City Hall. In western Massachusetts, 800 people walked out of UMass, and at LSU, a “die-in” occurred, as can be viewed here.

SLU students block intersection near Grand and Highway 40 while participating in #HandsUpWalkout. Pic by @LBPhoto1  pic.twitter.com/P2arAuKlg7

Joe, be sure and mention and show pics of the hundreds of #HandsUpWalkout protests yesterday. #morningjoepic.twitter.com/wE4phRPaTB

As NPQ reported yesterday, protests about the killing of Michael Brown and what it symbolizes are still very active and are making strong use of social media to coordinate actions across the country.—Ruth McCambridge