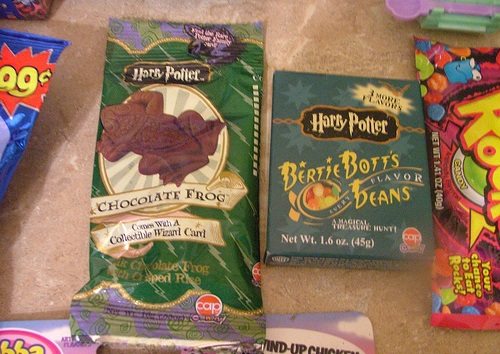 Some of us may have passed out reading volumes of J.K. Rowling’s Harry Potter series—which, after the third or fourth volumes, screamed for an editor armed with a hatchet, but Rowling may also have launched a new coterie of social policy activists. Like Harry Potter himself, armed with an appreciation of fairness and social justice, the members of the Harry Potter Alliance, founded by Andrew Slack, have chalked up a victory over child labor. Joshua Berger, the head of Harry Potter global franchise development, announced that by the end of 2015, all Harry Potter chocolate products will be 100 percent either UTZ or Fair Trade-certified. This victory was no overnight sensation, but the product of four years of HPA organizing.

Who would have thought that the young wizard who brought commercial riches to Rowling would turn into a rallying cry for progressive public policy activism? But that’s what Slack and his colleagues at the Harry Potter Alliance have done. While the HPA draws on Rowling’s pre-book stint on welfare as inspiration, a story that is a little on the hyped side, the Association has combined Rowling’s poverty narrative with her wizardry series to fashion a kind of advocacy that moves young people, as this article by the Washington Post’s Alyssa Rosenberg describes, to fight for “a more just world.”

It may also be that the Association’s ability to motivate Harry Potter readers relates to Rowling’s increasingly dark storyline as well as the nature of much modern fantasy writing nowadays. The dystopian post-apocalyptic theme is long and distinguished in classic fantastic literature, as with Ray Bradbury’s Fahrenheit 451, Aldous Huxley’s Brave New World, Anthony Burgess’s A Clockwork Orange, and George Orwell’s 1984. Rosenberg takes special note of Suzanne Collins’s Hunger Games series, which, like the Potter books, uses a dystopian theme aimed at young adults but argues for a just and honorable outcome. Videogames such as Bioshock and graphic novels like V forVendetta and Watchmen also capitalize on the dystopian theme combined with the recognition that a more just world is possible in the alternative.

“If Harry Potter [as a franchise] were to be in alignment with the values of Harry Potter [himself], it could be a real symbolic and coherent victory,” explained Slack to Rosenberg about the HPA motivation and strategy. “Harry Potter, more and more, is becoming a classic, and one that children are growing up on, with all seven books having been written. It’s part of the culture. It represents righteousness, nobility, love, so much beauty and a place of safety that people go to, and moral authority. If the Harry Potter brand were to move something like fair trade, it would be making a statement that not only is the Harry Potter brand a cut above the rest, but that [other franchises] have to catch up to it.”

Rowling herself is politically active, opposing Scottish independence and, according to Rosenberg, “slapping back against media mogul Rupert Murdoch on Twitter over his suggestion that Muslims take collective responsibility for the murder of Charlie Hebdo staff and Paris police officers.”

As Rosenberg suggests, the HPA activism—or the activism of Harry Potter aficionados, at any rate—doesn’t appear to be motivated by an overarching ideology. Rather, as with the campaign about Harry Potter chocolates, it is situational, tying possible issues to the “just world” interests of Potterheads. HPA’s “major funders” show the protean approach of the nonprofit. On the relatively brief list are Chase Community Giving, through which grants are determined by the votes of Chase customers and employees; a Montana nonprofit called the Foundation to Decrease World Suck, created by vloggers involved in Project for Awesome (which promotes videos about charities that “decrease the overall level of world suck”); and the UK-based Roddick Foundation, the family foundation of the late Anita Roddick, co-founder of the Body Shop, which is focused on “social, labour and environmental justice, and human rights.” It is an eclectic mix of funders supporting the Harry Potter Alliance, reflecting the diversity of Harry Potter fandom.

Give the Harry Potter Alliance credit. They may have been inspired by fictional wizards, but it was through the effort of Muggles that Harry Potter chocolates will, by the end of 2015, be fair-trade certified.—Rick Cohen