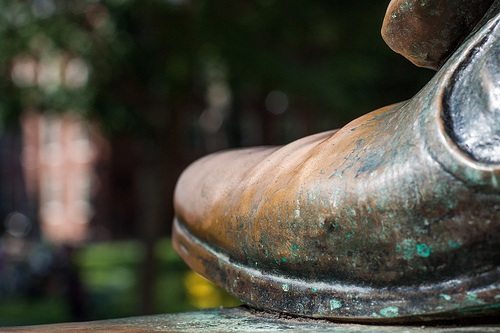 Rufus McDonald is an African American contractor with no more than a high school education, and he is also currently in possession of a collection of papers, estimated to be 140 years old, from Harvard’s first black graduate, Richard T. Greener. He is threatening to burn the papers, which he found in a trunk in an abandoned house five years ago, if Harvard does not offer him a fair price for them. He said he needs the money “so my nine-year-old twins can have the chance I didn’t and go to college if they want to.”

Harvard University, along with a few museums, had expressed interest in the historically significant documents that had previously been thought to have been lost in the 1906 San Francisco earthquake.

McDonald already sold two of the documents to the University of South Carolina, where Greener taught. He received $52,000 for them. The rest of the collection has been appraised at $65,000, but McDonald says that Harvard insulted him with their offer of $7,500. “I’ll roast and burn them,” he said, “It might sound crazy, but people who know me know I’d really do it—I’m sick and tired of Harvard’s BS.”

At the University of South Carolina, archivist Elizabeth West said the “priceless” Greener documents that University bought were important to an accurate understanding of the school’s history. She said that for many years, white racists tried to eliminate any trace of Reconstruction-era integration at the university, even cutting pages from books that referred to black students and faculty.

Greener was known “as a brilliant attorney, scholar, diplomat and orator devoted to racial equality, he was born to the son of a slave in Philadelphia in 1844, left school at 14 and became a porter at a Boston hotel. A pair of white businessmen helped him enroll at Harvard in 1865.”

Henry Gates, Jr., of Harvard’s W.E.B. DuBois Institute for African-American Research has been mum about the threat, but has said he wants the documents at Harvard. “I very much hope that Harvard acquires these documents at a fairly appraised value. Mr. McDonald’s discovery was extraordinary.”

NPQ would like to remind readers that Harvard’s $32.7 billion endowment is by far the largest of any U.S. University, but perhaps it has other priorities.—Ruth McCambridge