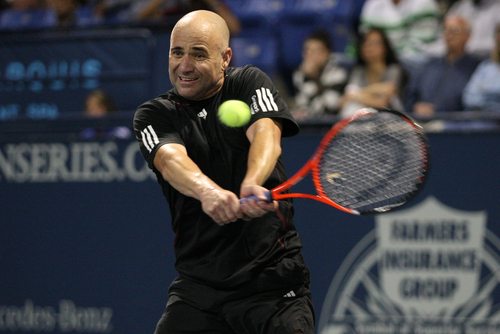 Former tennis star Andre Agassi has long supported charter school development, but recently he decided to switch his mode from philanthropist to hedge fund investor in the building of new charter school buildings.

According to Diane Ravitch, writing in February of this year, Agassi raised $750 million from a group of investors in Los Angeles called Canyon Capital to open a chain of schools branded to him. He wanted to grow this to hundreds of charter schools over time, but the model school was plagued with scandals.

Bobby Turner of Turner Impact Capital has long partnered with Agassi and is the one who brought the athlete on board in this unabashedly capitalist endeavor. “If you want to treat a problem in society, philanthropy is fine,” Turner said. “But if you want to cure—really cure—you need to harness market forces to create a sustainable solution. That means making money, because only then is it scalable. And by the way, there’s no rulebook that says you can’t make money and societal change at the same time. They’re symbiotic.”

Tennessee, like a number of other states, does not allow for-profit groups to operate charters, but it does not disallow for-profit real estate speculating where charters are concerned, an issue that has previously emerged as questionable. USA Today reports that “Agassi’s group covers the up-front costs to buy land and build facilities, which the Tennessean reported last year would be $7 million for the 37,000-square-foot Rocketship building in Nashville. Charter operators like Rocketship rent the buildings before buying them outright. It adds up to a profit for investors and space for kids.”

There are 26 charters approved to operate by next year and most will likely rent. No public dollars can go toward facilities or land purchase. Clearly, there is a market for new buildings appropriate for the schools, and Marketplace describes the pitch from Agassi’s investors as, “Let us build you a school. You focus on teaching. And if you want to buy the building from us in a few years, great.”

But “it kind of makes my stomach turn,” says Brett Bymaster, a parent in San Jose, where the fund has been operating. He has been trying to research the fund’s business model, but there is little transparency. Tenants are apparently required to sign nondisclosure agreements about what they pay as rent. “We need to partner with people outside,” says Bymaster, “but I don’t think the solutions to problems in my community are one-percenters getting filthy rich.”

This story suggests that even among charter school advocates, there are concerns about the involvement with hedge funds. Meanwhile, the fund is planning investments of more than $500 million to be used to develop another 70 to 75 schools over the next few years.—Ruth McCambridge