U.S. Senator Jon Tester (D-MT) is unhappy with Stanford and Dartmouth Universities over a mailer sent under their auspices to 100,000 Montanan voters concerning the state’s nonpartisan Supreme Court election. The mailer looks very official: the seal of the state of Montana in one corner, a stars-and-stripes “voters guide” circle in the other, with the title, “2014 Montana General Election Voter Information Guide.” The guide purports to show along an Obama-to-Romney continuum how liberal or conservative the four Supreme Court candidates might be, showing Mike Wheat close to Barack Obama, Jim Rice a little to the left of Mitt Romney, and Lawrence VanDyke and W. David Herbert to Romney’s right. 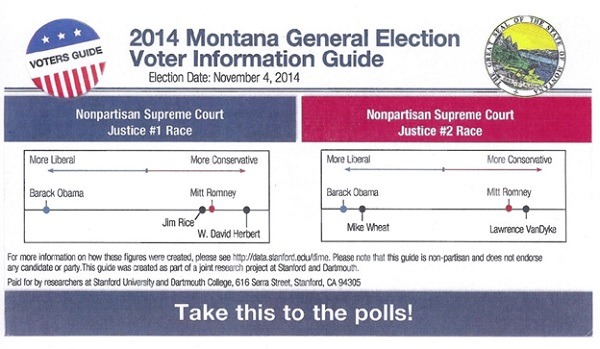 Tester charges that this mailer constitutes “voter manipulation” by the colleges. He has asked the presidents of both institutions to reveal the funding behind this effort. Montana’s Secretary of State, Linda McCulloch, filed a complaint last week that the mailing might have violated several state election laws (including, potentially, the unauthorized use of the state seal).

A Stanford spokeswoman, Lisa Lapin, responded that the university is conducting a full investigation of the mailing, which she said was funded by a $250,000 grant from the Hewlett Foundation, plus another $100,000 directly from Stanford University itself. The university subsequently apologized to the state.

The project conducted by the Stanford and Dartmouth professors, according to the Gazette’s Mike Dennison, is a “joint study is looking at how information on ‘candidate positioning’ affects voter turnout in judicial and other elections where voters can’t distinguish between the candidates by political party.” Montana would be an attractive test site for the research study because Supreme Court elections there are nonpartisan. Montana, however, is not the only state that was in the Stanford/Dartmouth study; mailers also went to voters concerning elections in New Hampshire and California.

Commenting on this research brouhaha, Menlo College political science professor Melissa R. Michelson writes in The New West, the blog of the Western Political Science Association, that two of the professors involved in this study, Adam Bonica and Jonathan Rodden, are political science professors and fellows at Stanford’s Hoover Institution, and the third is Dartmouth political scientist Kyle Dropp. The Hoover Institution is considered a reliably conservative think tank. On its website, viewed on October 27th, the organization touts an article by Edward Lazear published in the Wall Street Journal criticizing government forecasting as no better than a Ouija board, an announcement of an upcoming program hosted by Hoover with Congressman Paul Ryan to discuss his new book, and Scott Atlas’s critique of the “anti-innovation effect” of the Affordable Care Act. Former Bain & Company president Thomas J. Tierney, who founded the nonprofit consulting firm Bridgespan out of Bain, is chair of the Hoover Institution’s “board of overseers.” Among the well-known conservative political activists and financiers on the board are Peter A. Thiel, William E. Simon Jr., Margaret Hoover (Fox News), and James Piereson.

While Tester might be concerned about the conservative ideological tenor of the Hoover apparatchiks, it could well be that this mailer, seen by Tester as “undermining elections in Montana,” might simply have been a “poorly designed experiment,” though with no lesser impact of disruption on the Supreme Court election than if it had been a right wing dirty trick. Michelson notes that Montanans might be especially sensitive to political scandal, having witnessed problems with dark money being dumped into the state during previous election cycles. A few years ago, the anti-environmentalist American Tradition Partnership went to court to overturn Montana’s ban on direct spending by corporations on political candidates and political committees, but the Montana Supreme Court upheld the ban (subsequently overturned by the U.S. Supreme Court). A change in the state’s Supreme Court composition as a result of the races mentioned in the Stanford/Dartmouth mailer could be significant for future campaign regulation, environmental regulation, and other governmental policies in Montana.

Even if the assumption is correct that Dropp, Rodden, and Bonica were not attempting to improperly influence the Montana election, their approach to the research has upset the apple cart. According to Michelson, “the Bonica group blundered in not anticipating how…[the] context [or previous dark money scandals in Montana] might color reaction to their mailers.” There’s academia and then there’s real life. Bonica and his colleagues seem to have missed the real life dimension of their research. If this really is merely a mucked up research project, the research team might have done damage not just to themselves, but to other researchers with better, more defensible, less tone-deaf projects looking at what gets voters to the polls. If, however, any scent of political bias were to be identified in the design—for example, where the candidates were placed on the ideological spectrum compared to Obama and Romney, the damage to legitimate political science research would be deeper and more difficult to undo.

For the Hewlett Foundation, even though the grant went to the Hoover Institution, Hewlett had every right to expect that the methodology would avoid having disruptive effects on a contentious election and not stumble into state election law violations. But if further problems ensue with this research, Hewlett will be compelled to explain what it did to select researchers who, regardless of their think tank home, were expected to conduct well-designed political science research. As Michelson notes, citing Dawn Steele’s work on field experiments, “Ethical field research requires that the research itself leave no trace.” In the Montana Supreme Court election, the Stanford/Dartmouth team may have left a large and inappropriate footprint.—Rick Cohen