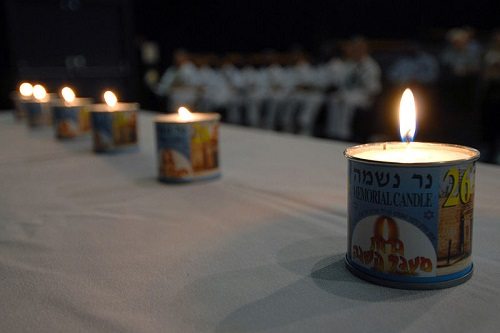 In the wake of the agreement between the Fatah-led Palestinian Authority and the Hamas government of Gaza, the statement of the PA’s Mahmoud Abbas might have been a little unexpected in some quarters. Leading up to Holocaust Remembrance Day, celebrated yesterday in Israel, PA leader Mahmoud Abbas told the Palestinian news agency WAFA that the Holocaust, the killing of six million Jews by the Nazis and their allies, was “the most heinous crime to have occurred against humanity in the modern era.”

It isn’t the first time that Abbas has acknowledged this, contradicting statements he made many years ago questioning the fact of 6 million Jewish deaths, but he made the statement in an interview with a Palestinian news service, and that means Palestinians are likely to hear or read his statement. He added that the Holocaust was “a reflection of the concept of ethnic discrimination and racism, which the Palestinians strongly reject and act against.”

For many Jews, the Holocaust is a persistent reminder of the venal impact of ethnic, religious, and racial discrimination. It is historically what has motivated many Jews since World War II to stand with ethnic and racial groups facing discrimination and violence. One can see that in the widespread activism of many in the Jewish community against Sudanese genocide in Darfur, the horror of the hundreds of thousands of deaths in Rwanda, and the equally horrific killing fields run by the Khmer Rouge of Cambodia, to name but a few of the post-war tragedies aimed at eliminating entire populations.

It is also, for those of us of Baby Boomer and Greatest Generation ages, part of what motivated so many Jews toward visible activism in the civil rights movement—not just the significant proportion of the whites who rode the freedom buses in the South, but examples like Michael Schwerner and Andrew Goodman, who were killed along with their colleague James Cheney by the Klan in Mississippi, their bodies dumped in a shallow grave.

Holocaust denial is hardly gone. Iran’s current clerical leader, Ali Khamenei, just last month launched yet another tirade against the factual nature of the Holocaust, continuing a trend from the former president of Iran, Mahmoud Ahmadinejad, who actually launched a research team to investigate whether the Germans could have possibly killed as many Jews as historians (and the Germans themselves) said they did at Auschwitz. Even the “moderate” current political leader of Iran, Hassan Rouhani, has been unable to say anything that comes within miles of what Abbas had to say.

Abbas’s comments on the Holocaust are meaningful as the strongest statement on the Holocaust ever from a Palestinian leader and voiced during a time when peace negotiations between Israel and Palestine are in trouble. It matters hugely when a nation with 193,000 Holocaust survivors still living within its borders hears acknowledgement from a longtime opponent of a historical fact that motivates so many in Israel.

Take the Abbas statement a step further: Will the combination of Abbas’s now-repeated statement about the Holocaust and Fatah’s recognition of Israel as a Jewish state move the PA’s Hamas partners to accept both in order to make a two-state solution a reality? And will Prime Minister Binyamin Netanyahu and his allies in Israel work with U.S. Secretary of State John Kerry to give the PA some room to make headway on these issues by listening to Kerry’s powerful statements and cogent advice uttered just last week at the Trilateral Commission, about the risk that Israel could turn into an “apartheid state” if it doesn’t stop counterproductive policies such as the expansion of West Bank settlements?

As we think on the Holocaust, remember that this time isn’t just for honoring the aging population of survivors or those whom we have lost, but also for pondering the meaning of the Holocaust for social justice. That is why one sees, among many Jewish activists, extraordinary support for immigration reform, protection of voting rights, and marriage equality—all issues well reflected in the agenda of the nonprofit called Bend the Arc, formerly the Jewish Funds for Justice.

Those of us with family members with concentration camp numbers on their arms or with relatives who died in the camps think about the past, but know that remembering the Holocaust requires an orientation toward a just world in the future as well.—Rick Cohen