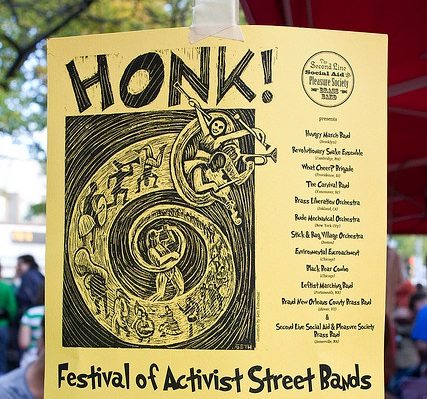 Some street performers voyaged all the way from Europe for the event, such as the Pink Puffers Brass Band, which flew in from Rome. Ensembles chanted politically charged messages like “Change comes from within!” into megaphones. The New York Times exclaimed, “It was hard to tell where the politics ended and the party began.” The culture of Honk! Festival is focused on the collective, with bands encouraging their audiences to get involved and bring their own instruments to join in on the musical fun.

This writer attended said parade as it wound its way from Davis Square to Harvard Square, where the streets were already filled with people for the annual Oktoberfest, an event which has been going on since 1969 but now has been undeniably and happily transformed by the addition of the Honk! parade. All welcomed the performing musicians, including roller derby girls, Amnesty International (Free Pussy Riot), Veterans for Peace, a local Haitian group and the local Masons, among many, many others. Who knew so many elderly people could play tuba and how many young kids could dance on stilts?

Matt Arnold, a member of the Rude Mechanical Orchestra—an activist band which has been involved in numerous antiwar and Occupy Wall Street protests, said “We enjoy the opportunity to get together with other bands and exchange ideas and songs and tactics.”

Thousands of local residents and businesses offer financial support to the festival, neighbors accommodate hundreds of performers, and local restaurants generously provide food for the bands. Somerville’s Honk! Festival, which began in 2006, has inspired additional Honk! Festivals to spring up in Seattle, New York City, Austin, Texas and Providence, R.I.

As someone once said, “If I can’t dance, I don’t want to be a part of your revolution!” –Aine Creedon