How “Affordable” Is the Affordable Care Act? 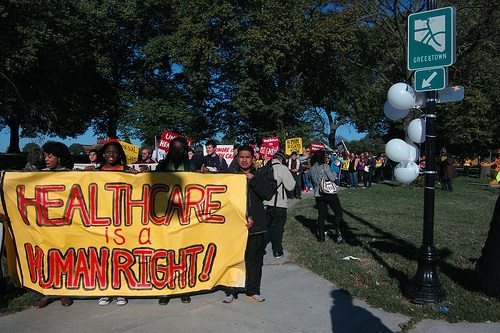 In his recent piece for Stateline, Michael Ollove asks whether the Affordable Care Act will give low-income people health insurance that is truly affordable. Increasingly, anti-poverty agencies are raising questions about the affordability of new health insurance. “For those with very low wages trying to raise kids, after paying for housing, electricity, food, transportation, and child care,” said Sireesha Manne, an attorney at the New Mexico Center on Law and Poverty, “asking people to pay another $50 or $100 a month, that’s just out of reach.” Manne’s concerns are shared by others. “Even with the subsidies,” Janet Varon, the executive director of Northwest Health Law Advocates added, “some people simply won’t be able to manage to pay their health insurance premiums consistently with all the other costs facing them.”

Ollove writes that there is a mechanism in the Affordable Care Act that allows states to address the problem of people whose incomes are above Medicaid eligibility thresholds but are still too poor to afford health insurance purchased on the exchanges even with the availability of federal health insurance subsidies. The law allows states to create programs called the “Basic Health Program,” which would involve federal subsidies paid to the states which would then use the funds to pressure insurers to offer less expensive coverage. Unfortunately, the federal government hasn’t issued regulations for the creation of Basic Health Program mechanisms, regulations that the advocates expected much earlier so that these state pools could have been initiated in 2014. Now, with no Basic Health Program regulations, advocates fear that these programs might not get started until 2016.

Here’s part of the problem. Families with incomes up to 400 percent of the poverty level, but too high for Medicaid, are expected to be able to pay 9.5 percent of household income on health insurance. A family of three with an income of $73,240 is supposed to be able to afford health insurance premium costs of $6,958, with subsidies available for premium costs above that. In addition, families with incomes between 133 percent and 250 percent of the poverty level can get some federal assistance with other medical expenses such as co-payments, but only if they purchase at least a “silver” plan on the exchanges (less expensive and less comprehensive coverage than “gold” and “platinum” plans, but more expensive than the bare-bones “bronze” plans).

Ollove raises an important question of what “affordable” really means. A lower income family in Mississippi may not have to pay housing costs that are anywhere near as high as a comparably poor family living in New York City. That 9.5 percent of income for a family at 400 percent of poverty in Mississippi might be much more tolerable than 9.5 percent for a family in New York City. There may, however, be factors that reverse that equation, making health expenses for a family in Mississippi more difficult than for a New York family. Unfortunately, as Sherry Glied, the dean of New York University’s Robert F. Wagner Graduate School of Public Service, said, “It isn’t like there’s a fixed definition of affordability.”