How Can We Miss You If You Won’t Go Away: Active Secession Movements in the U.S. 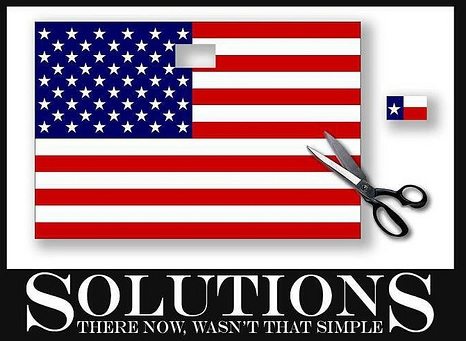 Secession movements are increasingly active in various states. Too often, they’re simply characterized as rural—which is totally unfair to rural America. What they are is politically right wing, anti-government, libertarian—and fruitless.

The latest is a group called the Western Maryland Initiative, led by one Scott Strzelczyk, which advocates that five western counties, containing only 11 percent of the state’s population, obtain an “amicable divorce” from the rest of Maryland. The registered voting population in the five counties is predominantly Republican, contrasting the rest of the state’s overwhelmingly Democratic political demography. The Initiative’s “FreeWesternMaryland” Facebook page has garnered 4,696 likes, though it is difficult to use likes as a measure of the Initiative’s public support.

The Initiative’s Strzelczek may be a resident of western Maryland, but more influential in his desire to divorce his region from Baltimore, Silver Spring, and Bethesda are his political beliefs. According to the Washington Post, Strzelczyk seems to be a libertarian in favor of “personal liberty, less government intrusion, less federal entanglements,” though despite his libertarian support for medical marijuana and his call for government to be out of marriage, he would put the question of gay marriage to a vote. He calls himself a “constitutionalist” rather than a libertarian, which may be how he has gotten the pro bono help of Suzanne Olden, a paralegal who opposes abortion, gay marriage, stronger gun control, and, with particular venom, the state’s storm-water management fee. Another source suggests that western Maryland secessionists also complain that the state doesn’t allow hunters to kill enough bears in Garrett County.

The Siskiyou County secession effort in California started with a county board of supervisors’ resolution drafted by a local radio station owner. While some of the county board’s public statements explaining their motivations cite environmental regulations, the Jefferson Statehood Project is clearer about the movement’s intentions: “Free people – Free Markets – Limited Government.” The county supervisors of neighboring Modoc County apparently plan to vote about joining the Jefferson movement later this month.

Understand these secession efforts as politically conservative, not rural, movements. Just about every year, the movement for the state of “South California” pops up, originating in the not-quite-so rural Riverside County, California located in the “Inland Empire.” South California’s advocates call for the state to include 13 counties, but scooping out Los Angeles as unwelcome. Secession advocates cite “high taxes, [an] unfriendly business environment…and large-scale government assistance” as the complaints requiring cutting ties with Sacramento.

As another example of a secession movement with a more suburban origin, on Change.org, something called the New Energy Party has a petition for Upstate New York to secede from New York State, though its definition of “upstate” seems to be everything except for the five boroughs of New York City. Making the Big Apple into the 51st state was part of the campaign platform of Norman Mailer and Jimmy Breslin when they ran for New York City mayor in 1969, but the New Energy Party’s politics aren’t quite as liberal, calling for “emancipat[ing] Up-State New York from NYC before it looks like Detroit. UP-State New York slavishly controlled by NYC liberals has become unbearable. Please continue to help US WIN Emancipation & Freedom from NYC Liberal Oppression.”

Like recall movements and voter initiatives, secession movements are an example of citizen engagement and mobilization, though usually on behalf of fringe political beliefs. To suggest that these are rural complaints, as opposed to politically right-wing, frequently libertarian initiatives, casts an unfair aspersion on rural Americans.—Rick Cohen