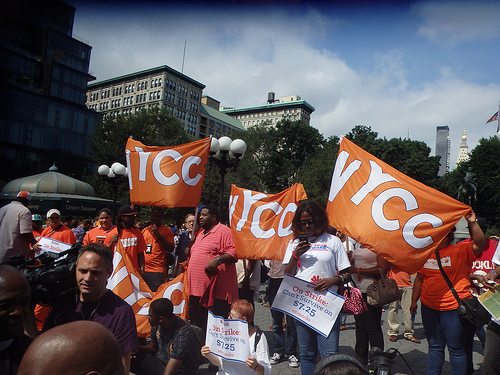 A staff writer for In These Times, Sarah Jaffe often generates thought-provoking commentaries about critical issues facing society—and, of course, nonprofits. In this op-ed in the Washington Post, Jaffe addresses a problem of press coverage of low-wage workers: The press is writing about the challenges of living on a minimum wage, but isn’t writing about the importance of those workers’ voice and agency in achieving wage progress.

For example, she notes that McDonald’s has told the Securities and Exchange Commission that it might raise staff wages, and Walmart appears to be even supporting a raise in the minimum wage, but there is little press coverage of the organizing and advocacy of low-wage workers themselves in achieving whatever progress might be coming. Jaffe notes that the SEC filing of McDonald’s attributes its new thinking about wage rates to the public discussion of the minimum wage that has been occurring in recent months and to campaigns by low-income workers.

Jaffe’s right. We’re all pretty good recently at documenting how impossible it is to live on a minimum wage. We all decry the fact that in this economic recovery, the jobs categories showing the most growth are low-wage or minimum wage jobs—often, of course, offering less than full-time hours as well. But we don’t do much about what low-wage workers are themselves doing through organizing to push the nation to rethink the minimum wage.

The strikes late last year of low-wage workers from McDonald’s, Wendy’s, and other low-wage fast-food emporiums received brief, episodic coverage in the press, as though the agency of workers themselves was something of an aberration. These were more than mere wildcat demonstrations. The continued agitation of low-wage workers for higher wages and for a raise in the minimum wage explains and helped lead to the 2014 revival of political attention from the White House and Congress for a $10.10/hour minimum wage.

Writers of the left and right seem to approach low-wage workers as objects, people to or from whom things are done, not subjects who want to exercise voice and agency to alter the employment conditions they face. We suspect that the press—including us here at NPQ—might not give enough credit to low-wage workers’ own organizing, but the message and meaning behind their organizing is getting through regardless of press reactions.

One of the popular arguments against raising the minimum wage is that minimum wage workers are really part-timers, that minimum wage earnings are akin to “pin money” for students, and the jobs are frequently intended for young people getting some early work experience or for adults earning a little extra part-time money on top of their regular incomes. Why in these circumstances would minimum wage workers walk off the job to strike or even join unions? Because the wages at these jobs aren’t inconsequential to the lives and incomes of the workers’ families.

Critics of wage increases for low-wage workers, or of increases in the minimum wage specifically, suggest that the workers’ organizing was really union organizing, not a workers’ justice movement. “Backers of this poorly-disguised effort by the SEIU [Service Employees Industrial Union] to organize restaurants are alleging widespread theft of wages,” Michael Saltsman, research director at the Employment Policies Institute, said in a statement. “Call us skeptical: When the union is referring plaintiffs who were previously spokespeople at fast food strikes, the credibility of the whole effort is called into question.”

To him and others, the notion that workers at a McDonald’s or Wendy’s would link to and work with an entity with resources such as the SEIU is artificial and duplicitous; to others, it is how workers organize. Given that even individually owned fast-food franchises have access to the lobbying and PR resources of their parent firms and to quite well resourced political movements opposing minimum wage changes, low-wage workers logically search for support from entities such as SEIU or UNITE HERE to help them press their case for better wages. The notion that union involvement in support of low-wage workers is somehow inappropriate or deceitful is just one more example of the bias that views minimum wage workers as unable to think and act—and network—for themselves.

The lesson of Jaffe’s article is well taken: all of us in the media, nonprofit and for-profit alike, have to change how we think and write about low-wage workers.—Rick Cohen