How Much Profit Does a Nonprofit Need?

Editors’ note: This article is based on chapter 6 of Finance Fundamentals for Nonprofits: Building Capacity and Sustainability (Wiley & Sons, Inc., 2011).

Nonprofits need profit. Because every nonprofit is unique, the amount depends upon individual circumstances. This article will identify the key variables and explain how any organization can calculate the minimum profit it needs to prevent slow, steady erosion of the quality of its output. The calculation is so simple it can be done without pencil and paper, but it has far-reaching implications.

The key variable is capital. It is obvious that organizations should continually invest in their capital to keep it in top condition, but this is an elusive goal. When money is tight, managers may not be able to resist the temptation to skimp on investment, because the negative consequences are remote. Even managers with the best intentions may invest too little because they do not have a well-grounded investment target. What they need is a theory-based investment model.

Here is the theory. Economic models of production are a function of the particular combination of land, labor, and capital an organization uses. (A combination of resources is like a cookbook recipe—so much of this and so much of that.) In nonprofit organizations, every service-delivery model employs an ideal combination of resources. If the actual combination departs from the ideal, the quality of service will suffer. Once an organization chooses a particular service-delivery model, it must utilize more of every resource (more land, more labor, more capital) to produce more output at constant quality. Conversely, if it reduces the amount of every resource in the same proportion, it will produce less output but quality will stay constant.

Reducing the amount of a single resource implicitly changes the service- delivery model. For example, if an organization uses less capital without changing the amount of labor in the same proportion, the quality of its services will suffer. (Like using fewer eggs in a cake without reducing sugar, flour, etc.) No nonprofit organization would be so foolish as to throw away capital, but it might carelessly allow it to wear out or become obsolete, which amount to the same thing. Some organizations try to avoid steady erosion of quality by investing an amount equal to depreciation, but this is not enough. This tactic only maintains the value of assets at their original cost, which is insufficient, because inflation constantly pushes up replacement cost.

The capital investment needed to maintain the status quo in a given year is the rate of inflation (r) multiplied by total assets (A) on hand at the beginning of the year, which is how accountants measure capital. Division by spending on operations (S) converts this number into the minimum percentage of an operating budget that managers should set aside for investment. It is easier to solve this problem mentally by changing the sequence of calculations. Divide total assets by spending on operations, and then multiply by an inflation rate.

In accrual accounting, spending on operations is total expenses minus the non-cash expense, depreciation. Viewed prospectively, this approximates the size of an operating budget. (An operating budget excludes investment, but I will say more about budgeting later.) Users of cash accounting and endowed organizations need to tweak this formula, but I defer this discussion for the moment. I will also say more about the inflation rate later on, but for the purpose of illustration I will use a figure of 3.4 percent that I have calculated for the average rate of increase in the Consumer Price Index, All Urban Consumers (CPI-U), over a ninety-one-year period.1 Notice that the status quo profit rate is based on spending, not revenue, which is a popular base from which to measure profit rate.

The formula shows at a glance that organizations with a large asset base and a small operating budget need a higher rate of profit than organizations with negligible assets and a large operating budget. Incidentally, it also shows how organizations can get into trouble when they decide to buy the building they currently rent. Overnight, their assets-to-spending ratio goes from low to high, which requires them to become more profitable immediately. If they fail to grasp their new responsibility for making capital investment, problems will soon surface. I want to emphasize that the above formula shows the status quo profit rate. Growth requires greater investment and more profit.

It may seem strange that a university that owns many buildings (including a theater) would have a higher assetsto- spending ratio than a small theater company that owns an old store. However, the average productivity of the university’s capital is greater than that of the theater company’s capital. The university’s pricing policy and its ability to fill seats imputes greater productivity to its assets. This observation conveys an important lesson for nonprofit organizations: they can reduce their need for profit by squeezing more productivity out of their assets. The consulting work I do in my spare time has convinced me of widespread inattention to this point.

Occasional failure to meet the status quo profit rate is nothing for managers to worry about, provided that surpluses in other years compensate. Even consistent failure to meet this target does not portend demise, but it should put managers on notice of a need for periodic capital campaigns to upgrade their facilities. The formula enables managers to calculate how large a capital campaign they will need. The data in the table below indicate the size (in millions of dollars) of a capital campaign that will be needed to support a new $100 million investment in physical plant under different assumptions about a shortfall in the profit rate and how long an organization waits before conducting one (its planning horizon). The table appears in my book Finance Fundamentals for Nonprofits: Building Capacity and Sustainability.4 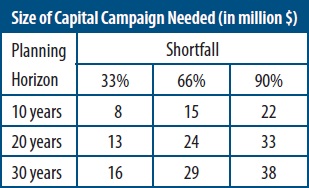 How a manager would use this table is best shown by an example. Assume that a nonprofit organization that needs a 6 percent profit rate but only generates 4 percent has a 33 percent shortfall (first column). It could wait ten years (first row) to replace this shortfall with an $8 million capital campaign. An equivalent interpretation of this example is that $8 million would be the price of a ten-year annuity (invested at a 5 percent rate of interest) that would exactly replace the shortfall. By equating the target of a capital campaign to the purchase price of an annuity, it becomes apparent that all of the numbers in the table will increase when the interest rate falls below 5 percent, and they will decrease when the interest rate on those securities rises above 5 percent. (I recommend using a benchmark rate corresponding to the yield on high-quality tax-exempt bonds issued by large nonprofit organizations.)

This completes an overview of the formula for the status quo rate of profit. The discussion will now fulfill the promises made above with respect to deferred topics, such as measurement of key variables; how users of cash accounting and endowed organizations should modify the formula; and how nonprofit organizations should budget for capital improvements. A question introduces each topic:

Regardless of your budget’s structure, you should have an investment plan. Do not simply rely on whatever is “left over” to finance capital investment. Take care of your capital, and it will take care of you. 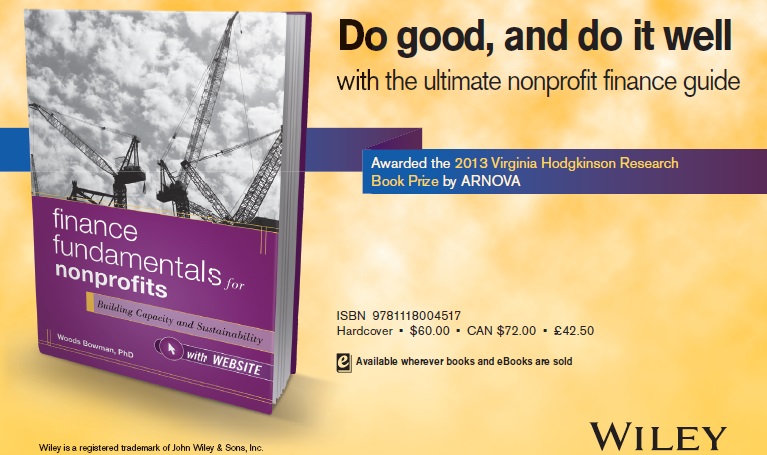