How Much Religious Teaching Should Be in Charter Schools? 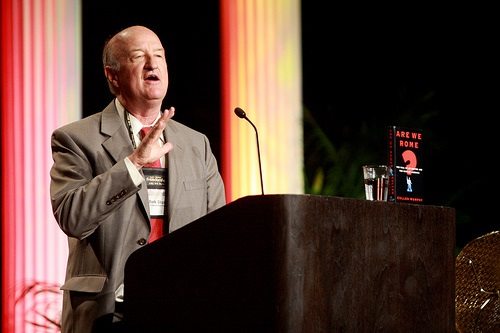 If you were to pick American theologians whose work should be included in a charter school’s curriculum, whom would you choose? In our corner, we might pick Reinhold Neibuhr and his brother H. Richard Neibuhr, maybe Walter Rauschenbush for his defining role in the Social Gospel movement, and of course Dr. Martin Luther King, Jr. All had significant roles in interpreting the role of religion in the development of America.

There are many other theologians whose books might warrant inclusion, but the Heritage Academy charter school in Mesa, Arizona is partial to the writings of Cleon Skousen, a conservative Mormon theologian and former FBI agent who declared that the founding of the United States was a divine miracle. Twelfth-grade students at Heritage have to read two Skousen tomes totaling at least 1,200 pages.

Don’t know Skousen? If you were a Tea Party–type, you might; he is largely read in those circles. Christina Botteri, a spokeswoman for the California-based National Tea Party Federation, was quoted in this article by Cathryn Creno in The Republic to say that one of Skousen’s books is considered “a handbook of tea-party ideals” and specifically inspired her to join the Tea Party movement. TV and radio personality Glenn Beck, who rediscovered religion in the late 1990s when he became a Mormon, is a fan of Skousen and wrote in the foreword for Skousen’s The 5,000-Year Leap that the book was “divinely inspired.”

Americans United for Separation of Church and State believes that Heritage’s inclusion of Skousen as required reading for its seniors constitutes illegally teaching religion. Heritage responds that Skousen is on the required readings list for students “to show them that religion influenced what the Founders did,” according to Heritage founder and school principal Earl Taylor. Alex Luchenitser, associate legal director for Americans United, counters that Skousen’s books “push ‘Christian nation’ propaganda and other religious teachings on impressionable young students.”

Public schools cannot teach religion, but religious books, even the Bible, can be used as part of an academic curriculum. In Heritage’s view, Skousen’s books are part of the charter school’s history curriculum, demonstrating the role of religious belief in the movement for American independence. Americans United hasn’t yet sued Heritage or Arizona, but renewed its standing complaint with the State Board for Charter Schools this year. The state board, for its part, declared that its role is to “focus on whether the school is upholding the mission it describes in its charter,” not to determine which books it should or shouldn’t use.

Principal Taylor seems unlikely to back down on this one. A biographical sketch of Taylor on a website called “The Title of Liberty” notes that Taylor was privately tutored by Skousen himself and then became head of the National Center for Constitutional Studies, originally founded by Skousen as the “Freemen Institute.” The Title of Liberty mission statement hints at the likelihood that Skousen’s inclusion in the Heritage curriculum might be perceived as potentially religious: “We are united in remembering and promoting God, freedom, family, faith and peace by raising The Title of Liberty Standard in all of its forms throughout the land.” The father of 10 children himself, Taylor is listed as a presenter for the Latter-day Saint Home Educators.

Both of Skousen’s books, published by Taylor’s National Center, add up to hefty reading for high school seniors: 337 pages for The 5,000-Year Leap and 888 pages for The Making of America, according to Amazon. Taylor emailed The Republic to say he was cutting back somewhat on the mandatory Skousen readings, not because of the Americans United complaint, but to lessen the workload on the hard-pressed students. That doesn’t cut it for Americans United, according to Luchenitser, because the books are still used as textbooks at Heritage and recommended, though apparently now no longer required, to be read in their entirety.—Rick Cohen