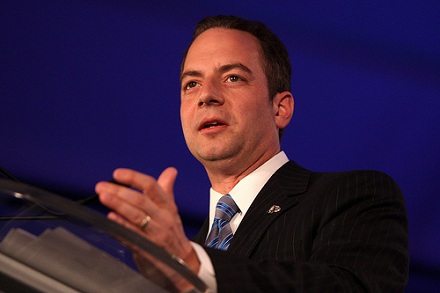 How politically partisan can 501(c)(3) nonprofits really get without wading into legal trouble? Republican National Committee Chairman (RNC) Reince Priebus may have just tested the waters.

If you’ve spent any time watching Fox News shows, you’ve probably seen Brent Bozell of the Media Research Center (MRC) skewering the liberal bias of the mainstream media, particularly on Sean Hannity’s program. The 501(c)(3) had revenues of about $12.3 million and total expenses of $12.6 million in 2011 and paid Bozell a salary of just over $400,000 plus $26,000 from other related organizations. No sentient being could possibly mistake Bozell’s politics for anything but very conservative, but as a 501(c)(3), there is a limit as to how politically partisan the MRC can go with its ideological bent.

At its dinner and awards ceremony at the National Building Museum, the MRC gave out its “DisHonors Awards” for what MRC considers to be over-the-top liberal bias in the media—for example, former “Today Show” host Ann Curry quizzing Paul Ryan using budget numbers she got from the Center on Budget and Policy Priorities, described by Jonah Goldberg of the National Review as “just another far-left, pro-Obama outfit.” Without a doubt, much fun was had by all.

We were struck by the reportage of Priebus’ telling the audience, “we’re going to fire Barack Obama and end this European nightmare.” As Slate’s David Weigel notes, you don’t often hear that kind of direct partisan political statement at a 501(c)(3) event. As far as we know, Priebus isn’t an employee or board member of MRC, so one might say that whatever he might utter is his own business and not the responsibility of his 501(c)(3) host. On the other hand, Priebus attended in a formal capacity; he was there to accept an award “on behalf of” MSNBC talking head Chris Matthews, an assignment assuredly made by MRC, not by Matthews. Moreover, he is actually an employee of the Republican Party and his appearances are generally done while he wears his partisan political hat.

Plenty of other presenters and speakers assuredly lampooned the president. Laura Ingraham mocked Obama’s singing an Al Green song (and dutifully mocked a version that Romney might sing with much less soul than the president). But ripping into the president’s policies and making fun of Democrats isn’t quite the same thing as a Republican Party official telling an audience that it’s time to remove the president from office.

Without a doubt, there are liberal/left (c)(3)s where an occasional speaker might go over the top to tell his or her colleagues and constituents to march to the polls in favor of this or that Democratic candidate. Although we have seen several IRS investigations of churches for pastoral sermons that are overtly electorally partisan, we would guess that incidents like the Priebus commentary at the MRC annual dinner are common. Do you think it was okay for the 501(c)(3) MRC to recruit the RNC’s Priebus as a speaker with the pretty clear likelihood that he would take advantage of the mike to push for anyone-but-Obama on November 6th?—Rick Cohen