How to Dismantle a Field of Badly Needed Nonprofits

Last year, NPQ warned that it was almost impossible to imagine that most local refugee resettlement organizations would survive the Trump administration. Sadly, that prediction appears to have been fairly accurate. In Los Angeles, World Relief, which offers refugee resettlement services, has not had a new refugee as a client in almost a year. They have joined the number of many such services that have closed or reorganized as a result of the lower caps on the flow of refugees into the country:

In Eastern Iowa, the Archdiocese of Dubuque announced in December that it would end its 77-year-old resettlement operation, laying off some employees and transferring others to offices that include its immigration legal clinic.

At Catholic Charities in Minneapolis, officials said in May that they would stop resettling refugees and focus on helping a growing homeless population.

Nine nonprofits across the country are federally approved to resettle refugees and receive government funding for each case they handle. Until last year, each of them had an office in Southern California.

But World Relief and four others have shut down in the region, suspended operations, laid off staff or reduced their hours.

The local resettlement agencies are attached to nine national networks, which would make them stronger generally, but across the country, the flow of refugees is down 70 percent so far this year as compared to the same period last year. In fact, at the current rate, only around 22,000 refugees will have resettled in the US by the end of the fiscal year in October—and that is not even half of the cap of 45,000 set by Trump. It is also the lowest number since the refugee resettlement program was created in 1980.

Here’s how the United States compares across time, up to today when we are, for the first time, not only at our own historic low but lower than the rest of the world. 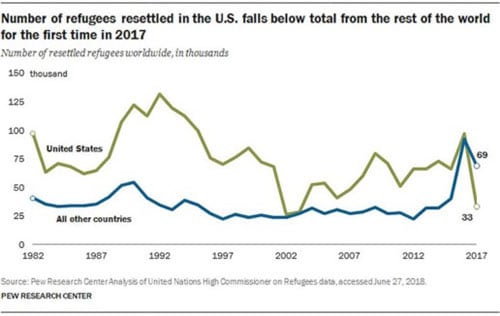 Here is another view… 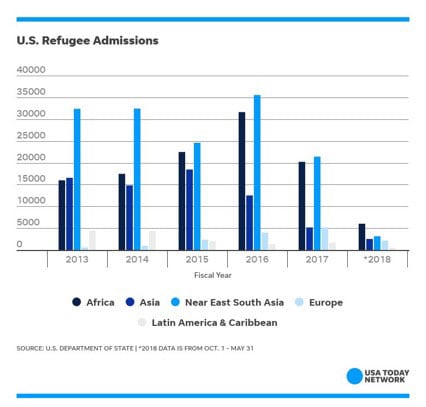 …and this is what the situation looks like in Arizona. 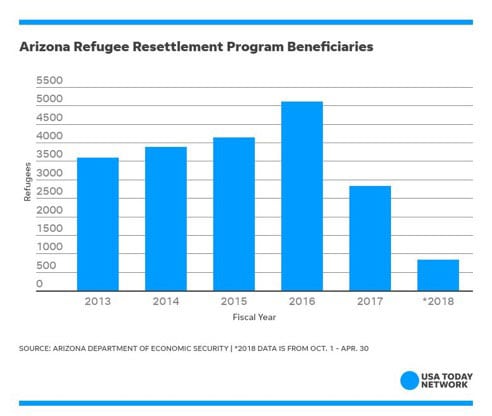 So, if we remember that the resettlement agencies are paid on a per capita basis, that is only when refugees are there to be served we can clearly see why many are now closed, or struggling to stay afloat, or trying to repurpose for a while to hold onto staff and facilities. In short, we are looking at the possibility of losing a good part of the resettlement infrastructure. This is a problem of historic proportions since their staffs are very specialized with very specific language and cultural capacities, along with the right local relationships and knowledge of the field.

Meanwhile, according to the United Nations refugee agency, the number of refugees around the world has increased to 19.9 million, having climbed more than 23 percent since 2015. According to ABC News, Muslim are the hardest hit group; the number of Muslim refugees admitted to the U.S. has dropped substantially more than those from other religious denominations. From October through June 14, only 4,800 Muslim refugees were admitted, as compared to FY 2017, when more than 45,000 were welcomed to our country.—Ruth McCambridge