How to Have a Joyous New Year

A couple of days ago, I got a call from a young woman asking that we cover a demonstration in Boston. Normally I would have thanked the caller and explained that we do not cover events: we are national and too small to do this in a way that is geographically fair. But the demonstration, a “die-in” using art as a medium for communication, was a Black Lives Matter action by local high school art students, and I thought about what our being there might mean to those involved. At that moment, our usual regulations seemed of lesser importance.

The resulting piece is still getting lots of readership, but I also wanted to highlight this photo, taken at the scene, which I think is a great doorway into a year in which we should be paying much more attention to the organizing of young people. 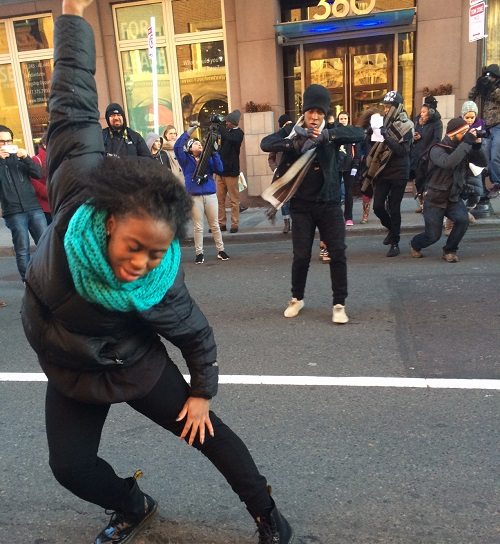 I suggest this for any number of reasons, not least of which is that some of the new organizing looks so different from what we have been a part of in the past. I cover that in the first section of my “NPQ’s 11 Biggest Nonprofit Stories of 2014 and Their Implications for Our Future.”

As always, we have a lot to learn if we can get out of our own way. As Shafaq Hasan describes it in her coverage of the event, “The raw emotions that often emerge during these types of protests driven by deep, personal stories can be uniquely captured through art. Much like the universal sentiments in this movement, art transcends our boundaries. Perhaps the most striking element of these protests has been the community that has emerged, with people of all walks of life showing their support for the difficult and often personal issue of racism. Art can and should be the shared language for that conversation.”