How to Steal from a Nonprofit: Who Does It and How to Prevent It

Editors’ Note: This article was written as a working paper for the Hauser Center for Nonprofit Organizations at Harvard University. It has been adapted and published in collaboration with the editors of the Nonprofit and Voluntary Sector Quarterly. Readers can access the full article in the December 2007 NVSQ at http://nvs.sagepub.com.

Is it easier to steal from a nonprofit organization than from a business? That’s what some researchers have speculated, arguing that an atmosphere of trust, the difficulty in verifying certain revenue streams, weaker internal controls, a lack of business and financial expertise, and a reliance on volunteer boards all contribute to increased nonprofit vulnerability.

To identify how people steal from nonprofits and how to prevent it, we turned to the biannual surveys of fraud examiners. In its Report to the Nation on Occupational Fraud and Abuse published in 2005, the Association of Certified Fraud Examiners (ACFE) focused on both internal and external fraud. In all, it studied in depth 508 cases of occupational fraud representing $761 million in losses. In segregating its findings by sector, ACFE’s 2005 report enables us to draw some lessons and comparisons specifically related to nonprofits.

Of the 508 occupational fraud cases reported by ACFE members, 58 or 12%, occurred in nonprofit organizations (see Table 1). In the case of Enron, WorldCom, and other for-profits, the primary underlying offense was misrepresentation of financial information to investors, regulators, and the public. In contrast, nonprofit crimes tend to involve the less complex unauthorized taking of funds for personal use. But when you look at the median losses per incident, they are strikingly similar to losses suffered by businesses and significantly higher than those suffered by government. According to the report, fraud losses in the 58 nonprofit cases ranged from a low of $200 to a high of $17 million, with a median loss of $100,000.

The ACFE survey found that both payroll and check tampering fraud were more common in the nonprofit sector than in the business sector, while false invoices and skimming from revenues were more prevalent in for-profit entities. Four of the 58 nonprofits realized losses of more than $1 million, while an equal number of organizations experienced losses of $2,000 or less.

Who Commits Fraud?
According to ACFE’s study, the typical nonprofit fraud case was committed by a female with no criminal record. She earned less than $50,000 a year and had worked for the nonprofit for at least three years.

More than 25 percent of the reported nonprofit frauds were conducted by managers, while 9 percent of the perpetrators were executives. Organization managers committed fraud that resulted in the greatest median loss to the organization ($150,000). The most costly frauds were those perpetrated by male managers andexecutives earning between $100,000 and $149,000 per year.

The perpetrators’ ages ranged from 20 to 62, with a median age of 41. Median tenure with the organization was seven years but ranged from less than one year to 35 years.

While only 19 percent of the frauds involved collusion (i.e., the involvement of more than one person), the median loss for frauds involving collusion was more than four times that of frauds perpetrated by a single individual. As part of the survey data gathering, respondents were asked to disclose the criminal history of the perpetrator(s). Most perpetrators had not been charged with or convicted of any crime prior to the fraud, and the size of the loss was not correlated with a criminal background.

In the business sector, fraudulent financial statements have been widely publicized, which in 2002 led to passage of the Public Company Accounting Reform and Investor Protection Act, also known as the Sarbanes-Oxley Act. Typically, financial statements are falsified by one or more of the following: (1) overstating revenues, (2) understating liabilities or expenses, (3) recognizing revenue or expenses in the wrong period, (4) reporting assets at either less or more than the actual value, and (5) failing to disclose significant information. Fraud examiners reported three cases of fraudulent nonprofit financial statements. Overstating revenues resulted in the largest loss, at $10,000,000. Inappropriate asset valuation and lack of disclosures both resulted in $100,000 losses.

Uncovering Crimes
How was fraud discovered? Contrary to what some might believe, it was relatively rare for fraud to be discovered via the audit process. More than 86 percent of the sample organizations had undergone external audits, which is much higher than the rate of audits experienced by the overall nonprofit population.

Although internal controls and internal and external audits were useful in identifying a third of the fraud cases, nonprofit organizations that had undergone internal or external audits did not see a reduction in the size of their fraud losses.

Are People Held to Account?
When a fraud is discovered, an organization can charge the perpetrator(s) criminally and/or civilly. Seventy-two percent of the nonprofit frauds resulted in termination, but 7 percent resulted in no punishment. In comparison, for-profit fraudsters were more likely to be terminated (88 percent) but had an equal chance of not being punished (7 percent).

This does not mean that employers necessarily retained the fraudsters. In many cases, it was reported that the perpetrator quit or disappeared when his scheme was discovered. Not surprisingly, large losses were more commonly referred to law enforcement for criminal prosecution (72 percent). The median loss related to frauds reported to the authorities was $140,000 as compared with just $6,700 when no criminal referral was made. Of those cases resulting in criminal prosecution, 70 percent of the accused individuals pleaded guilty or no contest and five were acquitted.

Finally, survey respondents were asked whether a percentage of the loss was recovered. Fifty percent recovered nothing, with a median loss of $95,873. Thirty-four percent completely recovered their loss (median loss of $25,350). Insured organizations recovered about 57 percent of their loss. 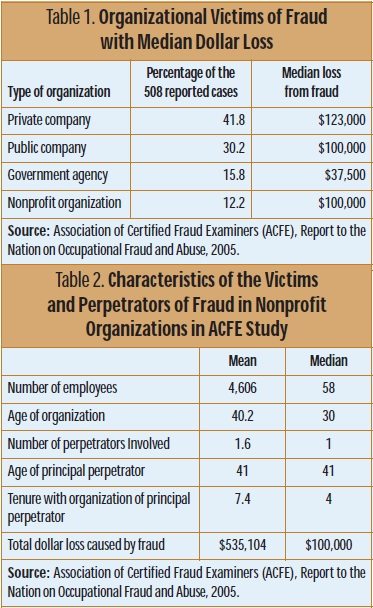 Predicting and Preventing Fraud
According to W. Steve Albrecht, a leading expert in this field, workplace fraud perpetrators resist a single profile, and their fraud is difficult to predict. But the best predictive characteristics for those who may commit fraud are employees with high personal debts or those who live beyond their means and who work in organizations that do not enforce clear lines of authority or proper procedures for transaction authorization. Financial personnel who refuse to take vacations is another red flag. The ACFE study found that the most likely locations for the kinds of fraud striking nonprofits (skimming, billing schemes, and cash larceny) are accounting personnel, followed by executive and upper management and sales.

So what should organizations do? First, every economic entity needs property insurance and, depending on size, may also need to buy employee dishonesty coverage to protect against fraud—usually when required by a governmental funding source or after a loss has been incurred. For this coverage, insurance companies may require nonprofit policy holders to ensure that bank accounts are reconciled by someone not authorized to deposit or withdraw. Second, officers and employees should be required to take annual vacations of at least five consecutive business days or the organization should be required to have an annual audit. Insurers want to see good business practices that in themselves help prevent fraud—and lower claims.

Prior to Consideration of Fraud in a Financial Statement Audit (SAS No. 99), auditing standards did not encourage fraud-detection procedures. With SAS No. 99, there is a better opportunity for the annual audit process to detect at least major fraud activity, but it is not a guarantee. Certainly, the external audit cannot be relied on as the sole detection or prevention strategy. Of the 58 nonprofit cases examined in this study, only 10 percent were discovered during the annual audit. Nonprofit audit committees and boards must install methods to reduce the risk of loss from fraud. Some key recommendations to reduce the risk of fraud as set forth by Floch (2004) and R. Wells (2005) include the following:2

Conclusion
While the ACFE sample is too small to draw firm conclusions about fraud in the nonprofit sector, it does highlight some interesting questions and challenges for nonprofits. Since it appears that audits and audit processes do not detect a great deal of fraud, and considering that many nonprofits do not conduct audits (while many others fall below the averages presented in this small sample), much of the burden for detecting fraud falls on informal systems that form the core of organizations’ operations.

There are some questions that organizations should ask themselves: What is our organization’s approach to transparency, and is there an open door for whistle-blowers? Is there a culture of asking questions and rewarding people for having asked them? Is the board and executive leadership engaged in a way that ensures that difficult questions are asked before fraud surfaces on its own? For organizations that do not conduct an audit, are policies in place to ensure good accountability? (For more on this topic, see NPQ Spring 2007, “Absent the Audit: How Small Nonprofits Can Demonstrate Accountability Without One” by Jeanne Bell and Steve Zimmerman.)

Janet Greenlee, PH.D, CPA, is an associate professor of accounting at the University of Dayton in Ohio.

Mary Fischer, PH.D, CGFM, is a professor of accounting at the University of Texas at Tyler.

Teresa P. Gordon, PH.D., CPA, is a professor of accounting at the University of Idaho.

Elizabeth K. Keating is an assistant professor of public policy at Harvard’s Kennedy School of Government and a certified public accountant

Is There Enough Overhead in This Grant?