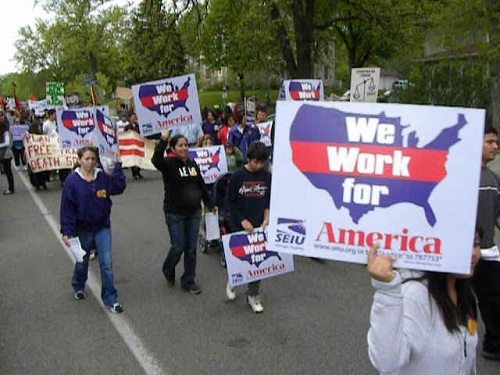 Senators, advocates, and other stakeholders in immigration reform have been dueling over border enforcement, federal benefits and entitlements, the pathway to citizenship, and even gay bi-national couples. The sparring will continue through the House of Representatives soon enough. Howard Husock, vice president for policy research at the Manhattan Institute, correctly points out that missing from the debate has been the integration of millions of undocumented immigrants who will be eligible for legalization should reform pass.

Husock highlights a provision in the Senate Gang of Eight’s bill, which he argues is just as important as more controversial sections. He writes, “The proposed Office of New Americans, designed to encourage what used to be called assimilation (or, in the politically correct parlance of the bill, ‘integration’), will try to use a special commission, public foundation, and some federal assistance to help immigrants ‘join the mainstream of civic life’…there should be broad agreement in any bill that passes that we should seek an increase in the number of immigrants who speak English, and in the number who become citizens.”

Husock realizes that “there’s likely to be dispute about just what that means—and how much should be spent toward the goal,” but he believes that “finding effective ways to realize these goals are far from side issues. Helping to bring the latest—and, in sheer numbers, the largest ever—wave of immigrants into the cultural mainstream will be crucial in defusing what may be lingering anti-immigrant sentiment, even if reform legislation passes.” He contends, however, that government might not be the right agent for the job and that integration is best left to philanthropists and nonprofit organizations.

Indeed, an Urban Institute study of immigrant-serving community-based organizations documents why these nonprofits are best suited to help immigrants integrate into our economic, political, and social mainstream. They are embedded in immigrant communities, are founded and run by immigrants, and know the particular needs of their constituents along with the most effective way of reaching and assisting them.

But will foundations and philanthropists step up to the plate and give adequate funding to immigrant-serving nonprofits that will no doubt be inundated by individuals and families seeking legal and other support services? Adriana Kugler and Patrick Oakford, senior fellow and research assistant respectively, at the Center for American Progress, estimate about 85 percent of 10.6 million undocumented individuals will be eligible for legalization. Community-based organizations are already stretched to the limit as it is. The current version of the Senate bill does include a provision authorizing about $50 million in grants to nonprofits that assist eligible immigrants through the process, but this will most likely be stricken out as the debate continues.

Experts from all sides have made projections about how much immigration reform might cost, even though the details are in flux and passage of legislation is not guaranteed. Nonetheless, we need to factor in how much it would cost immigrant-serving nonprofits, and the philanthropic class had better be ready to loosen their purse strings.—Erwin de Leon