Immigration Reform Stalls in the House 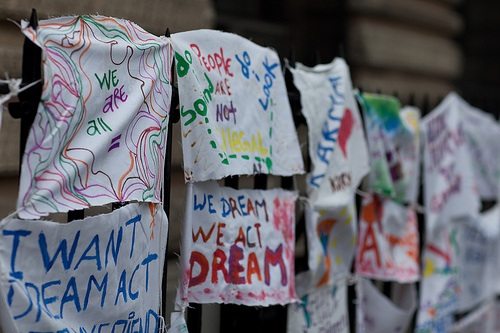 One thing that’s certain after the House GOP meeting last Wednesday is that immigration reform isn’t going to happen anytime soon. Republican representatives convened to discuss how to proceed after the Senate passed its comprehensive immigration reform bill, which includes provisions for what Senator McCain described as “the most militarized border since the fall of the Berlin Wall,” stringent law enforcement measures, and a path to citizenship for undocumented immigrants.

House Republicans are well aware that their party mandarins want them to act in short order and produce immigration legislation, but they are not to be rushed. The priorities of national Republicans and representatives are simply different. Party leaders fear losing the Latino vote in 2016 and beyond, while House members fear losing the conservative White vote in upcoming primaries. (Very few House members have sizeable numbers of Latino voters to worry about. On average, only 10 percent of voters in Republican districts are Latino.)

Any steps taken will be after the August recess, and they will be small. The inclination is toward tackling immigration reform piecemeal, starting with border security, interior enforcement, visas for high-skilled workers, and an agricultural guest worker program. But a path to citizenship, a crucial component of any comprehensive immigration reform bill, is a non-starter for most House members, being tantamount to amnesty.

Some Republicans have suggested an alternative path that leads to “legalization,” not citizenship. But isn’t this just semantics? The Senate bill would legalize the status of undocumented immigrants and, after 13 years or so, allow them to naturalize. The House could pass a bill that “only” provides legal status, but under the current system, immigrants could eventually get green cards and in time, citizenship. The process might be tougher and longer, but it nonetheless ends the same…unless formerly undocumented immigrants are banned from ever becoming citizens.

In the meantime, others like House Majority Leader Eric Cantor and Judiciary Committee Chairman Bob Goodlatte are open to providing a path to citizenship for one group of unauthorized immigrants: those who were brought into the country as children. Cantor and Goodlatte are drafting their own version of the DREAM Act, which passed in the House but failed in the Senate in December of 2010.

Immigration reform might still happen. But not any time soon, and not in a fashion as comprehensive as some of us would like.—Erwin de Leon