With all that’s taken place in the past week, you might be forgiven for not taking in the fact that US coronavirus cases are higher than they’ve ever been and appear on course to rise rapidly through the next two or three months.

We may cross the one-year mark with cases still increasing overall and intensifying in fits and starts across various regions. This will affect many nonprofits to their core as communities open only to close again and the economy loses more stability.

It would be nice if a new president-elect meant a successor bill to last March’s CARES Act, but that will most likely have to wait for late January, if it can be negotiated for even then.

How bad is it? On Thursday, Friday, and Saturday the new case count did not dip below 120,000, and on Saturday there were a record-breaking 126,742 cases. In many states, deaths and hospitalizations have also been at all-time highs. Worse than that are the projections of massive increases.

Dr. Megan Ranney of Brown University says this may take the form of multiple small epidemics that come as a result of holiday gatherings.

Already, 10 million, or a full one-fifth, of COVID-19 cases have occurred in the United States, which makes it the most infected country on the planet. Our infections and our deaths, however, are unevenly distributed, with older people and people of color at greater risk. Below is a chart showing the increase in infections not only among nursing home residents, but among their caregivers: 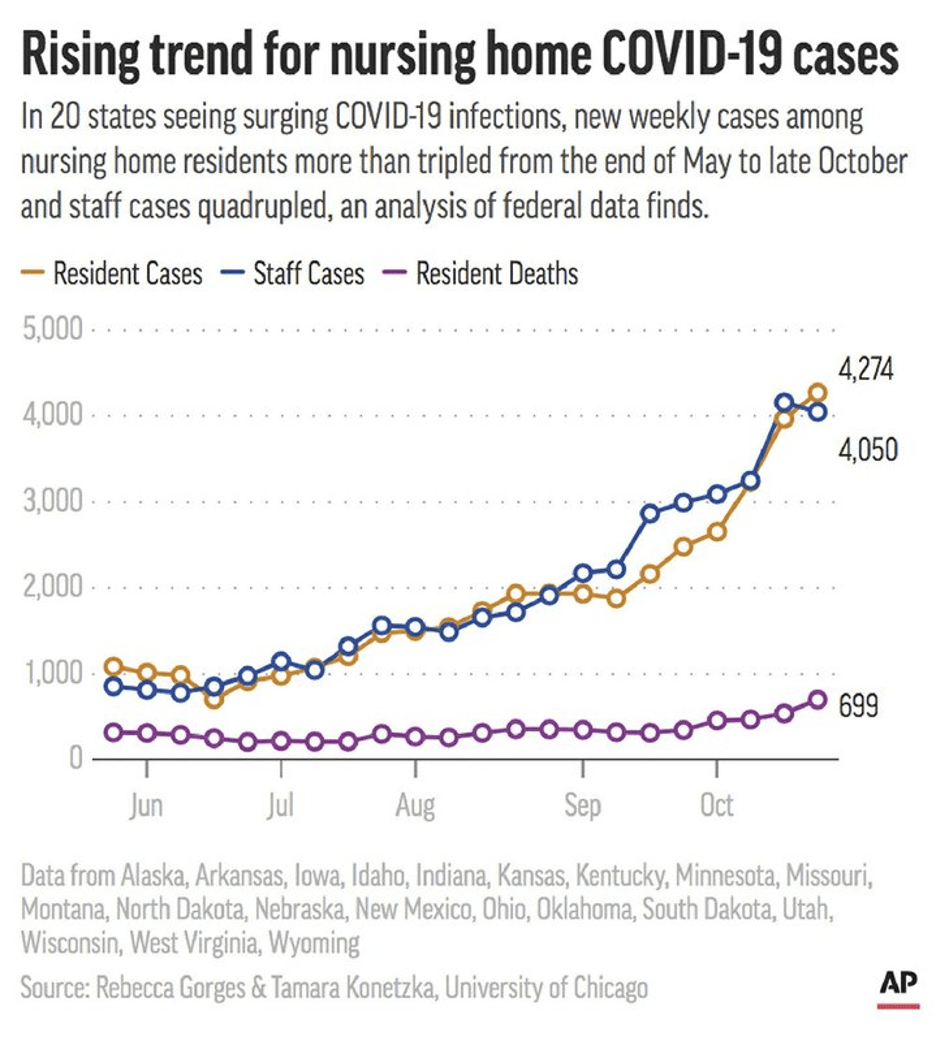 The increases are nothing less than astounding, especially in comparison with the lack of ongoing media alarm and the fact that although people in nursing homes make up one percent of the population, they comprise 40 percent of COVID-19 deaths.

An analysis of federal data from 20 states for the Associated Press finds that new weekly cases among residents rose nearly four-fold from the end of May to late October, from 1,083 to 4,274. Resident deaths more than doubled, from 318 a week to 699, according to the study by University of Chicago health researchers Rebecca Gorges and Tamara Konetzka.

Because the course of the pandemic is tied to so many other problems, President-elect Joe Biden did not hesitate to convene a task force, which will be headed by three co-chairs—former Surgeon General Dr. Vivek Murthy, former FDA commissioner Dr. David Kessler, and Yale University’s Dr. Marcella Nunez-Smith. The group will have 12 members, but Gottlieb also recommends that Biden work with the National Governors Association to build a plan that’s cohesive and tailored to local realities.—Ruth McCambridge

The “Long Awaiting”—Lifting Up Native Voices for...