In NYC, Social Impact Bonds with a Side of Politics 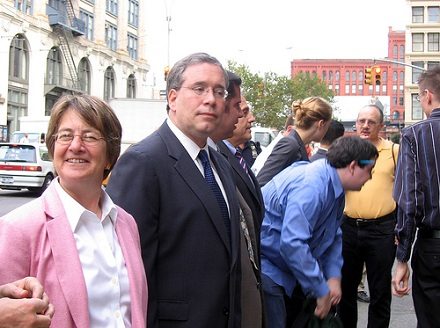 The NPQ Newswire has covered the concept of social impact bonds or “pay for success bonds” several times (see, for instance, here, here and here) as a mechanism for attracting investors in social programs—but not as a political campaign statement. In New York City, the social impact bond initiative of Mayor Michael Bloomberg, launched with a $10 million investment by Goldman Sachs in a jail program on Rikers Island, is getting replicated with a political overtone. Manhattan Borough President Scott Stringer has proposed a social impact bond effort to pay for expanded access to the Early Head Start program (for pregnant moms and for families with children up to three years old). Stringer says he was inspired by Mayor Bloomberg’s plan.

The political dimension? Stringer is positioning himself as one of the major candidates to replace Bloomberg in Gracie Mansion. He makes a point of noting, according to the Times, “that his proposal would not cost taxpayers anything and stood in marked contrast to what other likely mayoral contenders have recently suggested in education, which has emerged as a key early issue in the mayor’s race.” Stringer’s likely opponents—Bill de Blasio, the city’s public advocate, and City Council Speaker Chris Quinn—are associated with program ideas that, unlike Stringer’s, do cost money. Bill de Blasio has called for raising taxes on the wealthiest New Yorkers to expand prekindergarten classes and elementary school after-school activities. Quinn got the state legislature to approve mandatory kindergarten for all five-year-olds.

The director of Goldman Sachs’s Urban Investment Group, Alicia Glen, quickly pronounced Stinger’s proposal “really smart policy, and a terrific way for the public and private sector to work together and solve chronic problems.” New York City Deputy Mayor Linda Gibbs, who is credited with having come up with the Rikers Island social impact bond program, lauded the social impact bond model as one “where smart investments can produce meaningful improvement in outcomes and savings to the taxpayer.” The implication from both Stringer and Gibbs is that social impact bonds protect the wallets of hard-pressed taxpayers who otherwise might find themselves shelling out greenbacks to pay for programs like those proposed by de Blasio and Quinn.

Is this the latest positioning of social enterprise (though some might question whether an investor like Goldman Sachs can qualify as a social enterprise) as an approach to governing that is less costly than the old-fashioned notion of taxpayer-funded government programs? We have recently heard advocates of social enterprise suggesting that nonprofits free themselves from the government grants cycle, that social enterprises and hybrid organizations are the way to go in the future. Are social impact bonds part of that new movement, an alternative to an outmoded concept of government funding? Or is the notion that social impact bonds will fund programs without turning to taxpayers an attractive but unrealistic pipedream?—Rick Cohen