In Scandals, the Buck Stops—Where? A Penn State Lesson 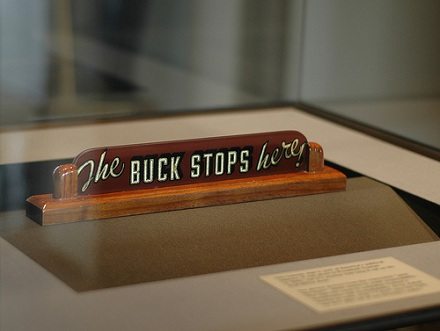 At least someone on the Penn State board of trustees had the decency and honor to resign. Steve Garban, who chaired the board when news of the Sandusky sexual abuse allegations reached the board last fall, decided that the right thing to do was to drop off the board. A group monitoring Penn State’s pathetic response to the situation, Penn Staters for Responsible Stewardship, wants all 28 board members who were in office during the period when information about Sandusky reached top administrators to resign.

Is Garban the only person in this situation with enough sense of responsibility, as late and as insufficient as it is, given the findings of the devastating Freeh report, to step down? In November—which tells you how long people in the know have done the “not my fault, not my job” dance—Jack Raykovitz resigned as CEO of Second Mile, the charity through which Sandusky allegedly recruited his victims, after 28 years on the job.

Beyond Penn State, there’s a broader principle at play here. It’s being played out in Washington, D.C. where some allege that the mayoral campaign of Vincent Gray was involved in an illegal “shadow campaign” to attack then-incumbent Mayor Adrian Fenty. To this point, Mayor Gray has denied any involvement in any such shenanigans. The question is this: if really bad things occur as a result of the behaviors and actions of the top people in an organization, should the titular head of the organization take responsibility even if he or she did nothing illegal? Shouldn’t the top dog resign because he or she is responsible for the actions of high-level staff regardless of his or her personal culpability?

That was the position taken by Ruth Coleman, who recently resigned after an accounting scandal at the California State Department of Parks and Recreation. Coleman was apparently unaware of the accounting problem (her deputy was fired as a result of it), but she accepted responsibility anyhow. An even more serious example is the resignation of former Florida A&M President James Ammons after an A&M band member died during a hazing incident. When there are serious scandals plaguing an organization, where does the buck really stop? –Rick Cohen