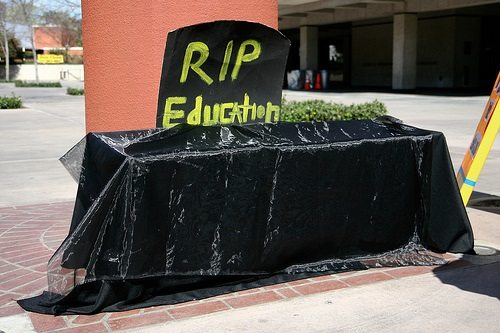 Last week, a number of students at Madison Park, Boston’s only vocational-technical high school, walked out in protest of treatment from the school system that implies to many that these students do not count.

Five school days into the year, these students were still waiting for schedules that would tell them which classes to attend. Justice Jackson, a senior, said, “We’re supposed to have new schedules and classes, but we don’t know what they are yet, so we can’t actually start our academic year.”

“We’re going to be far behind in academic work, and this is our senior year, and we can’t really have that,” said senior Yves Pierre. “We’ve got to get everything set up for next year.”

Madison Park was reportedly being reorganized. Apparently, the teachers did not get schedules either and, in fact, were not actually hired until mid-August.

Boston Mayor Marty Walsh said, “This is unacceptable. We should have had the schedules, but,” he added, “a little bit in defense, we did want to change the schedules so we can address the needs in the school that haven’t been addressed in a few years.”

Later that week, in Newark, about 150 activists blocked an intersection as part of the second day of student protests against the One Newark plan, which has revamped Newark’s educational system, in part by expanding charter schools and reassigning students.

“We are building a movement to take back democratic local control of our schools,” said Kristin Towkaniuk, president of the Newark Students Union. “Our action…will be an escalation demonstrating the community’s unrest over Chris Christie’s efforts to privatize our public schools.”

Parents have already led a boycott after a failed transportation plan left many children stranded on the first day of school. But students are learning—students from Science Park High School, Arts High School, and Central High School are participating in short courses on the history of student activism, artmaking for activists, and a workshop on student rights.

“We are tired of taking orders without our consent,” student Jose Leonardo said. “She (superintendent Cami Anderson) is an outsider. She should work with the community, [but] she’s not doing that. So if she can’t work with us, she might as well leave.”

It will be interesting to see whether such demonstrations become more common and focused over the year to come.—Ruth McCambridge