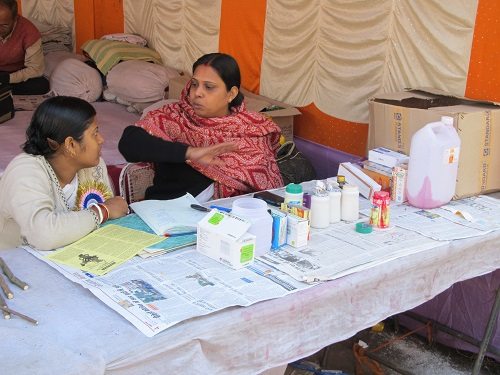 A charity cataract camp in the Punjab, it is reported, has left 19 patients at risk of at least temporary and possibly permanent blindness.

The camp was organized by an Indian medical charity, SKL Netra Chikitsalaya (SKL Eye Hospital). One government doctor who treated patients there said to the Hindustan Times that the victims had contracted infections after undergoing cataract surgery on November 4th. “They came to us in very bad condition…the infection had already spread,” Karanjeet Singh told India’s NDTV news channel, adding, “Chances of restoring their eyesight are, as a result, much lower.”

The Indian business newspaper, Mint, says through its reportage that, “The case once again highlight[s] the perilous state of health care in India, where hundreds of millions of poor people without access to doctors or health insurance are forced to seek treatment at medical camps because of poor services and corruption at government hospitals.” In 2013, the online version of Mint reported on 62 people in three separate camps who lost vision.

Medical camps are a feature of health delivery in rural India. The poor, many of whom subsist on less than $1.25 a day, are in no position to pay for even routine treatment. India is home to 23.5 percent of the world’s irreversibly visually impaired population, and another report cited suggests that cataracts contribute to 62.5 percent of that group. However, failures are not uncommon at such medical camps, where large numbers of people are operated on in often temporary or ill-equipped surgeries.

The Organization for Economic Co-operation and Development (OECD), reports Mint, has identified India’s poor health outcomes as one of the country’s major developmental challenges. An article in Monday’s issue of Mint summarized the five main problems with India’s healthcare:

The coordinator of the cataract camp is in custody, awaiting charges. The doctor who performed the surgeries, however, has been released, pending further evidence. At this stage, there is some good news in that six of the 19 who were apparently blinded by the surgery may yet have their sight restored. Earlier this year, NPQ reported on another type of routine surgery resulting in disaster for some of the patients. More than a dozen were reported dead after routine sterilization procedures. Those deaths were attributed to adulterated antibiotics.—John Godfrey