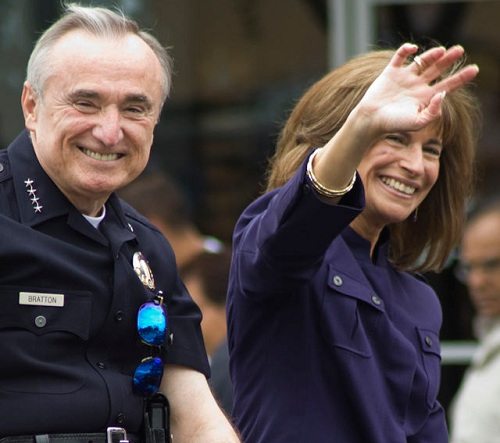 Sickened by these barbaric acts, which sadly are a predictable outcome of divisive anti-cop rhetoric of #ericholder & #mayordeblasio. #NYPD

The blaming of protestors—as well as New York City’s Mayor Bill DeBlasio, President Obama, Attorney General Eric Holder, et cetera—for the shooting deaths of two police officers in New York this past weekend is an appalling and irresponsible political feint that should be immediately named for the careless, even dangerous cynicism it exhibits. Police Commissioner Bratton should be fired for his lack of cool-headed leadership in a situation where emotions are high and where purposeful divisiveness could be deadly.

De Blasio, who has now asked for a pause in the protests while New York grieves, is in an untenable position as Bratton flexes his muscles rather than exerting leadership. He needs to repeatedly and clearly pull the two things apart as the protestors have, saying clearly that one—an engaged populace—is the heart and soul of self-governance and democracy, while the other is simply the act of a deranged man who was not at all interested in the issue of justice, but in public mayhem and suicide by murder.

“The protests are no more to blame for his actions than The Catcher in the Rye was for the murder of John Lennon or the movie Taxi Driver for the attempted assassination of Ronald Reagan. Crazy has its own twisted logic and it is in no way related to the rational cause-and-effect world the rest of us attempt to create.”

The protests and this killing of two more young men, this time in uniform, are not connected except in the minds of Ismaaiyl Brinsley, Bill Bratton, and, apparently, some police officers and officials and commentators who have clearly had enough of these demonstrations. It is a shameful bit of heated rhetoric that may get traction, but is also likely to inflame and incite more polarization.

Protest leaders, on the other hand, have clearly decried the shooting of the two patrolmen. “We’ve all said that this is a horrible thing that shouldn’t have happened,” said Charles Wade, a protest organizer. “I say time and time again that I’m against police violence, and I’m not against police officers in general. I have an issue with improper policing, police violence and police impunity.”

Dennis Flores, who runs a cop watch program, is worried about the reaction of the police:

“This is a historical moment,” he said. “We’ve never seen this kind of movement organize around police violence around the city, and around the country, like this before. What I fear is the language coming from the police department and the politicians. They’re waging war on activism. After this shooting, it’s a wartime police department. It sets a violent tone and now they’re going to be going after people in a very aggressive way—and that’s scary.”

And Jamelle Bouie of Slate writes:

“Despite what these police organizations and their allies allege, there isn’t an anti-police movement in this country, or at least, none of any significance. The people demonstrating for Eric Garner and Michael Brown aren’t against police, they are for better policing. They want departments to treat their communities with respect, and they want accountability for officers who kill their neighbors without justification. When criminals kill law-abiding citizens, they’re punished. When criminals kill cops, they’re punished. But when cops kill citizens, the system breaks down and no one is held accountable. That is what people are protesting.”

Meanwhile, it does not help that yet another former officer has been given a pass on the shooting of a black man—Dontre Hamilton, who was asleep in Red Arrow Park in Milwaukee. A 30-page report details that Hamilton was shot 14 times after he grabbed the officer’s baton and was threatening him with it. Hamilton, says his family, had only traffic violations on his record and he was neither homeless nor destitute, as has been described. The officer was fired for violating procedures, but will not be charged.

Bouie concludes, “The idea that citizens can’t criticize police—that free speech excludes scrutiny of state violence—is disturbing. […] If free speech doesn’t include the right to challenge the official use of force, then it isn’t really free speech.”—Ruth McCambridge