Infographic: Nine Effective Practices for Building Audiences for the Arts 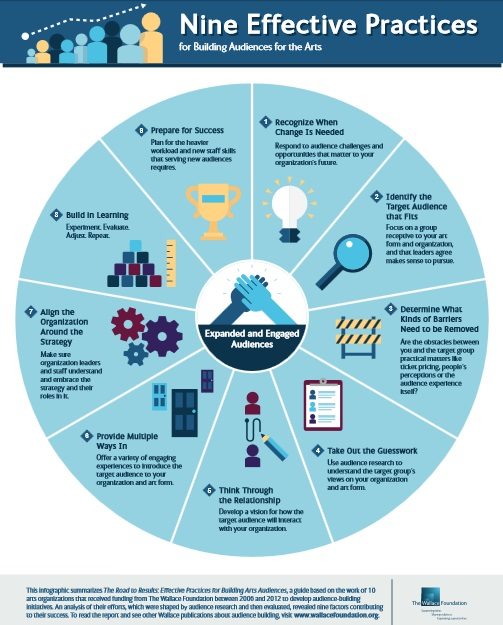 The Wallace Foundation, in announcing a new initiative to fund up to 25 performing and visual arts organizations to the tune of $40 million over a six-year period (see today’s related newswire, “Wallace’s Powerful New $40M Arts Audience Development Initiative“) also released the latest in its series of publications, Wallace Studies in Building Arts Audiences. The in-depth report is titled The Road to Results: Effective Practices for Building Arts Audiences and was written by Bob Harlow, PhD, a social psychologist and statistician. The report is based on audience-building projects funded by the foundation between 2006 and 2012. During that time, 54 arts organizations received Wallace grants for this type of work. The findings from this report will inform the new funding initiative, which will in turn form the basis of yet another layer of research into audience development.

This infographic represents nine effective strategies—in a wheel that suggests an ongoing continuum—demonstrated to have a positive impact on expanding and engaging arts audiences.

The organizations whose work is highlighted in The Road to Results are:

The full 91-page report (with a three-page executive summary of the nine practices) may be found here.—Eileen Cunniffe