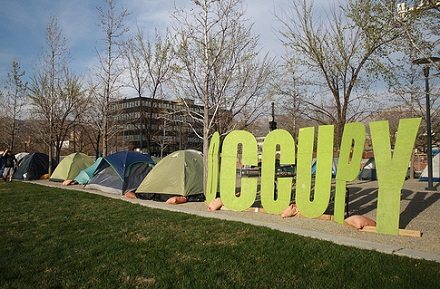 It hasn’t even been a full year of the Occupy Wall Street movement, but already observers and insiders are taking stock of the positives OWS achieved and the negatives OWS stumbled into.  A “Just Business” podcast hosted by Julia Taylor Kennedy includes the comments of four activists discussing the movement’s “serious growing pains.” Kennedy interviewed four very different Occupy activists for their personal takes on their Occupy experiences. As they say in “Law and Order,” these are their stories:

On getting involved in Occupy: “I made three trips there (to Zuccotti Park) before I actually started volunteering. It was only natural, when I went down and heard these people speaking essentially my language, and I felt like, ‘Wow, I found my tribe.’”

On the declining numbers of Occupy participants: “I wouldn’t say that I have seen our numbers swell. There was a good deal more people at our actions during the fall. What happened is that media coverage waned…”

On Occupy’s strategy for translating activism into action: “It’s not so much that banking is evil; it is that the system needs to change. Banking is a necessary industry. It’s the endless push for special treatment and tax cuts that I have a problem with. So Occupy Wall Street, it’s not our job to write legislation. That’s why we like legislators to do their job. We are going to continue doing our job, which is nonviolent direct action.”

On getting involved in Occupy: “When Occupy Wall Street started, I was like every day, ‘This is it!’ I like to pretend I have some sort of intuition, and I was like, ‘Okay, this is what I’ve been waiting for. I’ve got to go help. I’ve got to do my part.’”

On Occupy’s edgy approach: “Something I’ve seen is how valuable being reckless or being naïve about something, how valuable that can be. This is something that I think the left in a sense has forgotten. We kind of ignite that flame again.”

On Occupy’s decision-making processes: “At the risk of upsetting or frustrating Occupy people, the people who really identify strongly with that movement, one of the things that I have noticed about people who are in the working groups is that part of the reason that they have filtered out into working groups is because it is very, very difficult to get something through the general assembly—and things that are obvious… You read articles about people reporting that there are people going in and intentionally sabotaging the general assembly. This is a very new approach to decision-making. I’m not sure that we have figured out everything we need to know about getting large groups of people together in an open forum and then reaching unanimous consensus.”

On Occupy’s translation of activism into action: “My concern both with Occupy and other groups that I have done work with is there seems to be this barrier between activism and results. What I mean by that is there is the whole electoral process and there is the whole process of governing. There are the rare elected officials who will listen to activists and give them some time. But I don’t see a real penetration of the views and ideas of activists, many of whom really spend a lot of time and are very well-informed—I don’t see a huge penetration of those ideas into policy, into the positions that elected officials take.”

On Occupy’s place within progressive movements of the day: “I am certainly calling on sort of a wake-up, a real wake-up call to realize, ‘Hey, people are working on this all over the world and have been for dozens of years, and we have the potential to come together for something much bigger if we ally ourselves in the rubric of a great moral vision of equality again.’”

Said’s comment underscores a sense from all of the interviewees that the Occupy Wall Street participants often had little sense of how much else was being done by so many people throughout the years on building a politically progressive infrastructure for achieving desired policy changes. There’s often a tendency among older activists to dismiss the ideas of their younger colleagues with an all-knowing, weary, “We’ve tried that and it didn’t work.” And there’s often a tendency of new movement joiners to assume that nothing was happening until they showed up on the scene. The Occupy movement helped change the narrative behind some of the issues that progressives have long wanted addressed, particularly the income and wealth inequality issue. Changing the national narrative is an important step toward social change. Now the challenge for the Occupiers will be what will they be able to suggest that is concrete and potentially implementable, and who among the social and political advocacy organizations will be able to take that message to which policymakers.—Rick Cohen