Is Democracy Funding Undemocratic? Funding Civic Engagement in an Era of Protest 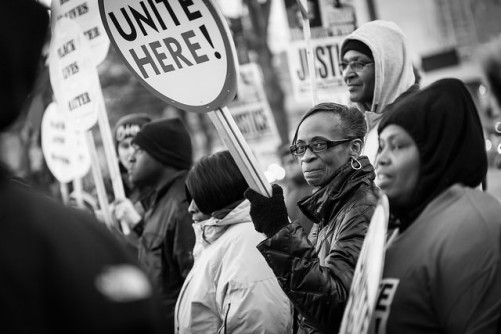 This piece is part of our ongoing Equity, Diversity, and Inclusion (EDI) Project created to spotlight millennials’ voices and thoughts on diversity and justice. We urge you to read how this project came together in collaboration between NPQ and the Young Nonprofit Professionals Network and about the ideology behind this series. We intend to publish another 20 pieces in the upcoming months. Readers will be able to subscribe to an RSS feed to follow articles as they are published, approximately every two weeks. NPQ and YNPN will be using the hashtag #EDISeries, so post about the series along with us.

“What we are trying to do is build a democracy,” said Baltimore organizer Tre Murphy to television news crews moments after a sit-in protest at Baltimore’s City Hall. Murphy and fifteen others were arrested at City Hall protesting the death of twenty-five-year-old Freddie Gray, allegedly at the hands of Baltimore police.1

The deaths of Freddie Gray and other unarmed black youth sparked a national yet localized movement that has recruited scores of previously unmobilized young people from underrepresented communities into the policy-making process for the first time. Social justice organizers across the country are activating underrepresented citizens who are the hardest to reach by political campaigns or formal institutions. Using trusted messages and messengers from the communities in which they live, these organizers use traditional civic engagement tactics like voter registration, mobilization, and democracy reform.

The United States is on the verge of an upsurge in democratic participation in cities and communities across the country, but will traditional civic engagement funders take notice?

Young and emerging movement organizers like Tre Murphy and so many others are absent from the grantee lists of major democracy and civic engagement funders, despite their embodiment of the ideals and practices of democracy in their quest for change. The generation of leaders emerging in this still-young century has yet to become the new face of the mainstream civic engagement community. While the leaders of what could be described as a twenty-first-century movement for inclusive democracy are largely women and people of color, civic engagement philanthropy and the organizational leadership it supports is stubbornly the opposite. If our grantmaking had proven particularly effective at rescuing U.S. democracy from restrictions on voting rights, assaults on campaign finance laws, and partisan redistricting in recent years, then perhaps the lack of inclusion of young and diverse movement leaders would seem less unacceptable, but most of us recognize that the movement leaders and social justice organizations they represent may very well be the missing ingredient essential for bringing America’s democratic practices closer to our stated ideals.

Despite the obvious strategic value in harnessing the energy of social justice movements, there are reasons why funders have been slow to support them. Several prominent civic engagement funders share an unspoken worldview that younger Americans and underrepresented communities participate in civic life at lower rates than others because of personal apathy rather than structural barriers deterring their participation. The foundational belief among some funders that nonvoters do not participate simply because they lack a sense of civic responsibility or are ignorant of the process is akin to the framing in economic policy debates that poor people should “pull themselves up by their bootstraps.” On the other hand, social justice organizations like the Advancement Project have rightly acknowledged how the efforts of extremists to undermine the right to vote, coupled with the outsized voice of moneyed interests and the lack of accountability by governing institutions, have largely contributed to current levels of low participation.2 There is quantitative—if limited—evidence for both explanations (individual and structural) of civic inequality in America to justify these deeply held beliefs about nonparticipation. This worldview governing institutional and individual donors’ conclusions about why marginalized communities are participating less than other groups has very real consequences with respect to how decisions are made about which groups and what strategies get funded.

Many civic engagement and pro-democracy funders also have an incomplete interpretation of American history that understates the importance of social justice in achieving democratic outcomes. The United States was, paradoxically, founded on both democratic ideals and the racist institution of slavery. While formal democratic processes in American history have been about checks and balances, the separation of powers, and protecting civil liberties, democracy has also been the terrain of struggle for social progress and inclusion by those at the margins of our society. Social justice, therefore, is a precondition for achieving full participation and healthy democratic practice in the United States. There is perhaps no greater example of this than the African-American struggle for democracy and inclusion and the demand for an end to racially motivated disenfranchisement. Too many civic engagement funders have ignored the complicated racial history of the United States and the role that racial hierarchies continue to play in creating current patterns of political inequality among underrepresented communities. The funding community that supports a movement for strengthened democracy and the funding community that supports the movement for racial and social justice exist separate