Is Lance Armstrong a Boon or Bane for Cancer Fundraising? A Bird’s-Eye View 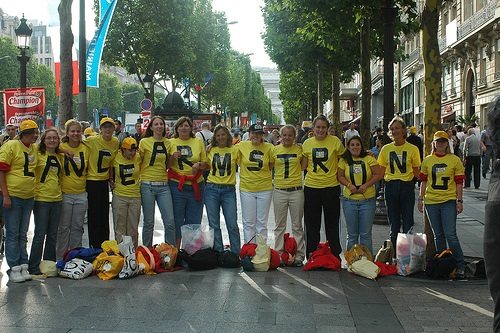 I’m writing to address a question NPQ raised on Twitter some weeks ago: Will Lance Armstrong help or hurt a charity event? The question was posed in response to Lance’s being banned in October from George Hincapie’s Gran Fondo benefitting Meals on Wheels.

It’s a good question. When I read the tweet, I thought, “I know the answer. I absolutely know the answer.” Not from an opinion standpoint, but from firsthand experience via my profession.

I’m an event producer. I started volunteering for the Lance Armstrong Foundation in 2002 when they were just a tiny nonprofit with about eight employees. I started producing their galas and some other events pro bono with a group of amazing volunteers and staff. I produced the gala the year that Nike shipped us some boxes of yellow bands for each guest to take home from the event as a gift. I had no idea what those yellow bands were; none of us did, as we found a spot for them at each place setting. I now know those boxes of yellow bracelets translated to $100M being raised on behalf of cancer survivors everywhere. The bands we unboxed that night were the first yellow bands that anyone ever received.

From the very beginning of working with LAF, I was struck by how easy Lance’s story and Lance’s name made it for me to ask for donations. People were more than happy to help on all fronts. Much of the time, people reached out to us to donate before we reached out to them. Every single gala or dinner was special and built from people giving what they could: in kind donations of flowers or design elements, their personal time as a volunteer to set up and break down the events, purchasing tables, celebrities donating their talents…you name it, people gave it. Lance wanted each event to be an experience for the donors and cancer survivors who attended, and we accomplished that with every event.

In the wake of 2012’s revelations, I didn’t know how my calls on Lance’s behalf would be received going forward. It didn’t make me nervous to ask, because I have known from day one that the work Lance does philanthropically makes a difference, a huge difference. I was then and am now very proud to be a part of that. Still, it was uncharted territory. Granted, I make fewer calls, because he doesn’t do as many events by a long shot now that he’s no longer involved with Livestrong. But across the board, I’ve had a positive response. People are willing to help at every turn. People want to host dinners he’s involved with. People want him to participate in their events. People want to attend events he’s attending. Cancer survivors and families of cancer survivors want him to be a part of their fight.

At an event or out in public, I’ve never seen someone react negatively to meeting him or seeing him. Quite the opposite. I’ve been in a restaurant when someone shyly came up to our table and said they didn’t want to disturb him but had to tell him what a difference he made in their fight against cancer, that they didn’t think they’d be alive without the hope he’d given them and that they didn’t care about the doping. I’ve seen different versions of that happen many times over since 2012.

If we want to look at it from a financial standpoint, how does his involvement impact the money raised at an event? I’ve seen that firsthand, too. I’ve produced the Camp Wapiyapi dinner in Aspen, Colorado, for the past three years for Lance and his partner, Anna Hansen. The event has grown each year. This past August, we raised $200,000 for Camp Wapiyapi at an event with 60 guests in attendance—because Lance was involved. We had an item from Lance’s racing days in the live auction and it raised $80,000. (Yes, that has the right number of zeroes.) Eighty thousand dollars that goes towards sending children with cancer and their siblings to a week of camp where they can forget about hospital visits and “being different.” I think that answers the question right there.

I believe the only people who suffer from Lance not having a place in the philanthropic community are the cancer survivors, which would be the greatest travesty of this story. I understand that punishment in the professional realm is necessary. However, turning Lance away from philanthropy is an injustice to him and the cancer survivors he’s helped in the past and will help in the future. I read things like the messages and stories below about Brienne Fisher, Stephanie Lee, Jimmy Fowkes and Elinor Scott, and I know this for sure: Lance should be welcomed back into the nonprofit world with open arms…to honor Stephanie’s fight, to honor Brienne’s fight, to honor Jimmy’s fight, and to honor Elinor’s fight. We should hope that he will continue to participate.

From Paul Hurdlow in Austin, Texas, after Lance called to speak to his wife, Brienne, who was battling colon cancer:

Lance literally changed her end-of-life experience. She had not put two sentences together for over a week. She was…happy!

Lance meant something special to her, she told me afterward. He meant survival. “The other stuff doesn’t matter,” she said. “He’s human.” And I can’t help but think she’s right. The trash that gets talked on the sports pages and social media is just that, trash talk. If you saw what I saw last night, you just saw two fighters. One is fighting for everything she has, fighting to be alive for her kid’s high school graduation. The other won the big battle but right now looks like he lost the war. But I’m not sure he has. This is not a photo of a man disgraced. The hope he gave Stephanie last night, just by being there, just by taking a photo, was very clearly what she needed as she marches on, toward surgery, more chemo, and maybe the experimental treatment that changes the way we treat cancers. She’s Patient Zero. She’s a superhero who had an incredible moment with another superhero—a moment so transcendent they didn’t have to have a real conversation. Just to bear witness was exhilarating. Because this is reality: We could all be waging Stephanie Lee’s battle one day. She could be your mother. She could be your sister. And last night, she found hope—and happiness—in the embrace of a stranger. It was magic. This photo isn’t a party picture.

And he really didn’t want to talk about Jimmy Fowkes, a Stanford student from Oregon and longtime Livestrong activist who was diagnosed with brain cancer at thirteen and, after dedicating much of his remaining time to helping other patients, died in February at the painfully unjust age of twenty-one. As he approached the end, Fowkes put Armstrong on a short list of people he wanted to see on his deathbed.

From Jodi Scott, Elinor Scott’s sister, after Elinor, who was fighting pancreatic cancer at the time, had lunch with Lance the weekend of the Boston Marathon:

We refer to our good days as “a sparkle day.” I just wanted to send a quick note to thank you. What a lovely afternoon with lovely people. My sister was inspired and happy and bright. Thank you. Thank you for making it a sparkle day. Please tell Anna good luck today and enjoy every mile even through any suffering. May you all have a sparkle day!