Is Rebuilding after Superstorm Sandy Misguided? 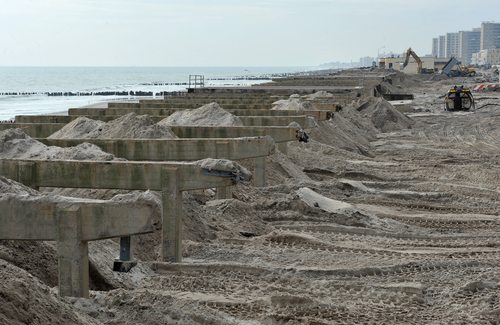 In the NPQ Newswire, much of the coverage of the response of government and charities to the Superstorm Sandy disaster dealt in terms of disaster relief and now rebuilding. Some people are suggesting that the policy on rebuilding the coast needs to be better thought through: Simply rebuilding what was there before Sandy may not be an adequate solution.

Rob Young, a professor of coastal geology at Western Carolina University, challenges the current directions of our national response to Superstorm Sandy:

“Since Hurricane Sandy hit the U.S. East Coast a year ago, federal, state, and local governments have made an important de facto policy decision without any debate, discussion, or national plan. It is this: We will attempt to hold the nation’s shorelines in place using whatever means possible and whatever the cost. We will do this despite the undisputed scientific fact that sea levels are rising and coastal erosion along these shores will only increase in the future. We will do this even though it will be environmentally damaging and the costs will be extremely high, with never-ending expenditures.”

He questions the report of President Obama’s Hurricane Sandy Rebuilding Task Force for its failure to make the “suggestion that we should be developing long-term plans for getting infrastructure out of high hazard areas.” He suggests that affected communities in New Jersey are elevating buildings, but he says, “Elevating buildings above the hazard is only a temporary solution to coastal vulnerability. It’s like standing in a river that is rising due to a flood. You can roll up your pants or hike up your skirt, but if the water keeps rising you will get wet. Better to just step out of the water.”

Young writes that a better alternative to elevating structures is a strategy of “managed retreat,” which he defines as “the abandonment of structures that are or will be impacted by sea level rise and other coastal hazards in the future.” He says that elevating buildings only works “if you also commit to holding all the beaches in place…forever.” He addresses the $5 billion in shore restoration projects planned by the Army Corps of Engineers in response to Sandy, pumping 20 to 30 million cubic yards of sands onto beaches from Delaware to Connecticut. Young points out that “The cumulative environmental impact on near-shore ecosystems from this level of dredging and filling is unknown.”

Young’s argument pulls no punches: “Some try to put green lipstick on these dredge-and-fill projects by calling them beach restoration. But let’s be clear: Rebuilding beaches and dunes in front of buildings is not restoration; it is engineering. The beaches and dunes are not designed to maximize their effectiveness as ecosystems. They are designed for storm protection.” Beach fill, he concludes, meet none of the standards and guidelines for restoration.

“We may decide, as a nation, that there are certain areas of the coast that are worth spending significant amounts of money on to build artificial beaches and dunes,” Young writes. “But there are approximately 3,700 miles of shoreline along the U.S. East Coast and Gulf of Mexico. We certainly can’t, and shouldn’t, do it everywhere. The costs would be too high and the environmental damage would be significant. We need a national plan to prioritize the spending of coastal protection dollars on those areas that have the best chance of long-term survival, or maybe those areas that are clearly in the best national interest.”

This is the kind of dialogue that nonprofits and foundations ought to be able to promote, and do a better job than political leaders, who might respond narrowly to constituents’ interests—rebuilding a beach or a road that might not be warranted or justifiable under sound ecological policy. We look forward to nonprofit leadership in a critical national environmental debate.—Rick Cohen