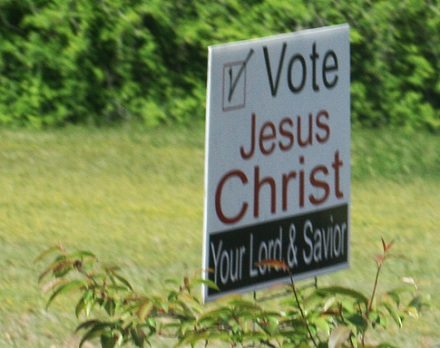 Evangelist Bill Keller runs a 501(c)(3) online church under the name of Bill Keller Ministries, though most people know him as the man behind Live Prayer, the public face of his online operation, where he posts a daily prayer video for his followers. Now, Keller wants to put Jesus in the White House. Just imagine the struggle of the IRS to figure out how to judge whether Keller, as the campaign manager for Jesus, may be violating the applicable prohibition on churches and charities engaging in partisan electoral campaigns (which NPQ noted that many pastors violated this past weekend for “Pulpit Freedom Sunday”).

This year, Keller is behind the Vote for Jesus! website, which claims that over one million people have signed up for vote for Jesus, presumably as a write-in candidate, and to “say ‘no’ to Satan this November.” The donation button takes you to Liveprayer.com, which states, “As part of Bill Keller Ministries, a 501(c)(3) organization, all donations to Liveprayer.Com are tax deductible.”

Keller thinks that both President Barack Obama and former Massachusetts Gov. Mitt Romney are a little too cozy with Satan. He calls Obama “a true enemy of God” and Romney a “fifth-generation member and a priest in the satanically inspired Mormon cult.” If you go to the Live Prayer website, one of its featured videos is titled, “Obama and Hitler.”

Keller is not a fan of other famous people, regularly lambasting Oprah Winfrey for her alleged promotion of new age theology, describing televangelist Joel Osteen as a “theological midget,” and criticizing highly publicized fringe church leaders such as Fred Phelps of the Westboro Baptist Church and Terry Jones of the Dove World Outreach Center as grandstanders who do nothing other than cause chaos in the search for headlines. Although he might not like Jones, who pledged to burn Qurans, Keller has a front page video titled “Liveprayer’s Bill Keller presents: Muhammed, the Muslim Pig,” one of many statements attributed to Keller expressing less than kind perspectives about Islam.

The Southern Poverty Law Center classifies both Dove World Outreach Center and Bill Keller Ministries as Florida-based hate groups under the classification of “general hate.” Keller has threatened a $100 million defamation lawsuit if the SPLC doesn’t remove his name from the hate group list. You can make your own judgment about Keller’s qualification for the hate group list by looking at his website’s statements about Mormonism and Islam, just to mention two of his targets. But he is clearly unhappy with the SPLC, making some interesting allegations, such as this one: “The sad shooting… at the Family Research Council by a man who supports the radical homosexual agenda, was clearly fueled by the left wing group, the Southern Poverty Law Center.” Or try this interesting perspective: “Groups like the Southern Poverty Law Center give license to individuals who oppose a Biblical worldview to take whatever actions they deem fit, even acts of violence, to silence those they disagree with…Because the anti-God secular media gives a platform to radical organizations like the SPLC, it opens the door for people who reject Biblical Truth to commit acts of violence against those individuals and organizations who have been demonized by them.”

Jesus undoubtedly has lots of supporters going to the polls, but he is unlikely to get enough write-ins to win. But isn’t Keller running a campaign clearly opposed to Obama and Romney? Aren’t there questions about the deductibility of charitable donations to Vote for Jesus through Live Prayer to Bill Keller Ministries given Keller’s vocal political agenda? Shouldn’t Keller be operating as a (c)(4), rather than as a (c)(3)? Or perhaps the IRS should come up with a special 501(c) category for hate groups?—Rick Cohen