Jewish Not-for-Profits Use Gaza War To Drum Up Donations 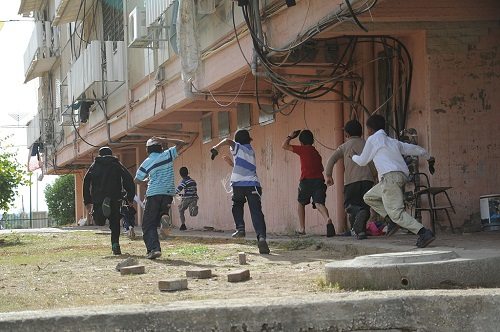 Israeli soldiers want you to buy them socks. And snacks. And backpacks. And underwear. And pizza.

So claim dozens of fundraising campaigns launched by American Jewish and Israeli charities since the start of the current wave of crisis and conflict in Israel and Gaza. Other Jewish groups are asking for money to pay for shelters, or fire engines, or therapists.

It’s all part of a wartime feeding frenzy among Jewish fundraisers that has raised uncounted millions from American donors in July.

Nearly every major American Jewish not-for-profit has a fundraising campaign pegged to the conflict: The Jewish Federations of North America, the Orthodox Union, Friends of the Israel Defense Forces and the Jewish National Fund. Even the left-wing New Israel Fund is raising money off the war.

And those are just the big institutional efforts. A Facebook group called Stronger Together posted a list of dozens of smaller, no-name efforts: six groups gathering money to send care packages of underwear and towels to Israeli soldiers, three groups sending pizza, one group sending falafel, one group sending backpacks.

“There are a lot of organizations, and they’re all seeking to show their relevance,” said Eric Fleisch, a postdoctoral research fellow at the Cohen Center for Modern Jewish Studies at Brandeis University. “I don’t think any establishment organization is licking its chops thinking about how much money they’re going to be able to bring in. I think they really think they can help—and when they help, it will help their brand and their own budget, while doing good work.”

The asks, piling up in email inboxes and littering the web, often feature violent wartime imagery. JNF’s donation page has a spent rocket and a crushed Israeli house. On the donation page of the group United With Israel there are rushing fire engines and bright flames.

Some Jewish groups don’t seem eager to discuss these fund drives. Neither JNF nor the O.U. would comment about their efforts.

During wars in 1967 and 1973, American Jewish funds for Israel flowed through the federation system to the Jewish Agency for Israel. According to Fleisch, those bulk payments indirectly funded the IDF by allowing the Jewish Agency to temporarily cover some civilian costs, freeing Israeli government dollars for the war effort.

In the current Gaza conflict, the federations have raised a $10 million pool that the JFNA is passing on to the Jewish Agency, the JDC and other groups. Jerry Silverman, JFNA’s president and CEO, said that the money is being used to meet immediate needs directly related to the conflict. “This was literally approved on a Thursday. The allocations started Sunday. So that the impact happened on Monday,” Silverman said. “Our donor base…have a very strong trust in our ability to take their dollars that they want to invest in Israel during these times to have impact.”

This time around, though, Silverman’s group has a lot of competition. One unlikely source is The Algemeiner, a Jewish newspaper that raised $103,000 in mid-July for its coverage of the Gaza conflict using the crowdfunding site charidy.com. The Algemeiner’s pitch included images of rockets and masked Palestinian rioters.

The Algemeiner’s editor, Dovid Efune, said that he had been able to hire two full-time reporters in Israel with the donations, where he had had only one part-time stringer. He said that he saw no ethical problem in using the conflict to raise the funds. “In our case, there is a very direct need for something specific that will aid the community, both in Israel and here, in being able to follow and address and be part of what’s happening on the ground,” Efune said. “Israel legitimately needs help at this time, and it’s an opportunity for the diaspora community to get involved.”

Many of the campaigns by smaller, little-known groups claim to be raising money to buy supplies for the IDF. A group called Standing Together is running a campaign on the website jdeal.com asking for small donations to buy toiletries and underwear for IDF soldiers.

“Soldiers are being called to Gaza. Rockets are being launched at Israel daily. The country is at war and we need to show the soldiers we are with them,” the campaign reads. “Organizations have been asked to raise money to supply soldiers with toiletries when they run out as well as hydration packs to make it easier to drink water without carrying a water bottle.”

The notion that the Israeli military, which receives more than $3 billion annually in military aid from the U.S. government and is one of the best funded in the world, can’t provide its soldiers with toothpaste is hard to swallow. A spokesperson for the IDF said that the military had not made an official plea for supplies, but items like extra socks and food can help morale.

“They have all the food they need,” the spokesperson said. “But at the same time there’s army food and then there’s snacks from back home…. If they know they have support from people back home, it’s extremely helpful and boosts morale for the troops.”

Fleisch said that the scores of campaigns around the Gaza conflict seemed like a throwback to the disorganized situation in the Jewish community before the major institutions began to coordinate their efforts more than 65 years ago.

“It harkens back a little bit to the reason for the strong control of the [Jewish charitable] system that the centralized organizations put into place” in 1948, he said.