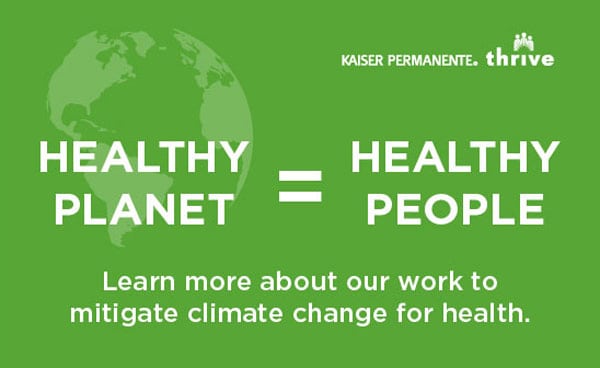 The use of renewable energy is becoming more affordable; as the sector grows, the costs go down. Medical facilities and hospitals are obviously energy dependent and generate substantial amounts of carbon dioxide—it is antithetical for a health organization to contribute to thousands of deaths through carbon dioxide added to the atmosphere. Various studies demonstrate that healthcare carbon dioxide generation increased from eight to 10 percent of the country’s total output in two years.

The nonprofit medical system Cleveland Clinic became one of the first to announce its aim to operate at carbon neutral in a decade, making the statement in 2017 after about ten years of making progressive steps in that direction. It is now joined by another nonprofit health system, Kaiser Permanente.

Headquartered in California, Kaiser Permanente is the largest US nonprofit integrated healthcare system in the country, with 12.2 million members. A $72 billion organization, Kaiser has announced it plans to be carbon neutral by 2020 as part of their overall environmental program.

Kaiser will have a solar farm with battery storage installed in Riverside County in southern California and a windfarm in Arizona. When the systems come online, by 2021, the health system will become the leader in purchasing renewable energy in US healthcare.

The Commonwealth Fund, “a private foundation that aims to promote a high performing health care system that achieves better access, improved quality, and greater efficiency, particularly for society’s most vulnerable,” weighed in on the decision to move to neutral carbon use, suggesting that lowering carbon dioxide emissions assists in meeting a healthcare system’s mission.

Kaiser is hoping to start a movement among healthcare organizations, towards a healthy community for humans and the environment. It has been working in Cleveland; the Clinic reports it has saved 50 million energy dollars in the last ten years. The system also states their program saved 600,000 trees, $30 million in materials, and reduced their output to landfills by 100,000 tons. About $3 million of the energy costs were saved by installing 400,000 LED lights. Air exchanging and conditioning is reduced in operating rooms when they aren’t being used.

These nonprofits, Cleveland Clinic and Kaiser Permanente, are keeping more in mind than the patients who walk in the door, using a broader interpretation of their mission statements to improve the health of the community.—Marian Conway