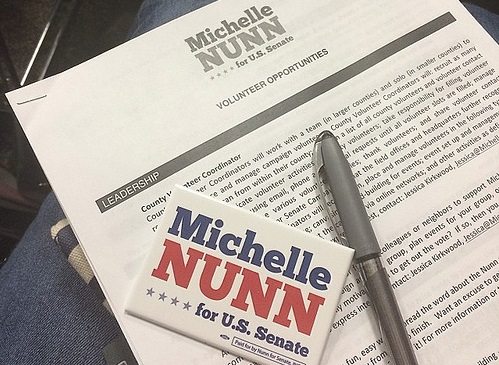 On the Democratic side of the ledger competing for the Senate in Georgia is Points of Light CEO Michelle Nunn, the daughter of former Democratic Senator Sam Nunn. Although on leave as CEO of the nonprofit, Nunn is using her Points of Lights home base to project an image of bipartisan reasonableness in the otherwise red state, including running her first television ad with George H.W. Bush, the forty-first president and the founder of Points of Light, highlighted. (George W. Bush’s brother Neil is actually the current chairman of the Points of Light board of directors.)

Nunn appears to be the candidate of choice for Democrats, but Republicans have a big slate of choices, one of whom is former Susan G. Komen for the Cure executive Karen Handel, who generated plenty of press headlines for her role in trying to separate Komen from a funding relationship with Planned Parenthood. Having some difficulties in raising money compared to better-known GOP opponents in the upcoming primary, Handel’s campaign was languishing until this past week’s endorsement by the American Future Fund, one of the big-money conservative groups that puts big money behind favored candidates. AFF’s endorsement may be more of a positive jolt to Handel’s campaign than the recent campaign swing she did in the company of endorser Sarah Palin.

It may be in her genes (her dad was seen as a conservative Democrat), it may be in her long association with the Bush family, or it might be a strategy for winning in Georgia, but Michelle Nunn is taking some conservative-leaning positions on a few high-voltage political issues. For example, she recently endorsed the completion of the Keystone XL pipeline from Canada, suggesting that it would boost U.S. economic development and, in any case, Canada is a more pleasant, acceptable source of natural gas than other countries. Overall, she is maintaining a pro-business, centrist kind of image, giving Republicans little to attack other than trying to paste the Obama administration onto her image.

You won’t find any mention of national health insurance reform—the Affordable Care Act or “Obamacare”—in the list of “ideas” categories on her campaign website, but Republican PACs are hitting her on healthcare reform like they plan to hit all Democrats in the 2014 cycle. She has distanced herself a bit from the Obama program, early on calling for a delay in the enforcement of the individual mandate (as recommended by Georgia’s Republican senator, Johnny Isakson), though she apparently supports the expansion of Medicaid in Georgia, something that Governor Nathan Deal so far has opposed.

Handel’s road to nomination is rockier. One of her primary opponents, Reebok executive David Perdue (former governor Sonny Perdue’s cousin) who is self-financing his campaign, recently publicly discussed Handel’s lack of a college degree, with the implication that she might not have the educational background to deal with the complex issues she would face as a member of the U.S. Senate. Out of fairness to Handel, it is worth pointing out that many people with college degrees don’t necessary demonstrate impressive intelligence and knowledge themselves, but Perdue’s attack on her qualifications is unlikely to subside.

Although Nunn is no liberal, a campaign between her and Handel would reflect somewhat different wings of the nonprofit world. The brief discussion of “issues” on Handel’s campaign website touches on nearly every hard-right policy position she might support:

Nunn is just about assured the Democratic nomination, while Handel is running well behind her primary opponents at the moment. It would be interesting, however, to see the two of them face off, particularly to watch how much Nunn tries to avoid sounding too Democratic and pro-Obama and how Handel tempers (or doesn’t) her beyond-the-pale right-wing positions.—Rick Cohen