Keeping Up with the Contestants for 2016: Hillary Clinton, the Clinton Foundation, and Cisco 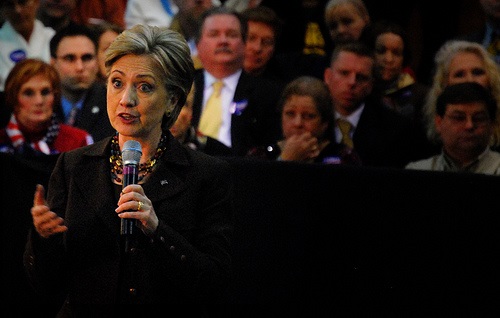 Although there has been a steady stream of revelations about potential issues concerning Hillary Clinton’s policies as Secretary of State and the corporate and governmental contributors to the Clinton Foundation, not much seems to be sticking to the candidate who is far in the lead for the Democratic presidential nomination. We’re guessing that there are a couple of reasons. One is that much of the controversy concerns issues in foreign policy, to which most Americans pay little or no attention but for the threat of international terrorism. The warm and generous image of Bill Clinton as philanthropist-in-chief also dampens potential questions about the foundation’s activities and the foundation’s relationship with Hillary as Secretary of State.

We’re also guessing that when it comes to corporate malefactors contributing to the foundation, most Americans—and even most philanthropic watchdogs, as we have discovered—aren’t necessarily tracking the corporations whose business practices domestically and overseas ought to spur questions when they intersect with philanthropic institutions.

For example, David Sirota, who we enjoy reading in numerous outlets such as Salon, and Matthew Cunningham-Cook have a piece in the International Business Times looking at the relationship of Hillary Clinton, the Clinton Foundation, Cisco Systems, and China. In 2008 and 2009, Cisco faced congressional inquiries and vigorous though ultimately unsuccessful shareholder activism about the corporation’s role in helping China build its “Great Firewall,” the mechanism by which the Chinese government censors information and, according to the authors, surveils its citizens. Cisco’s role in China’s Internet repression didn’t seem to faze the U.S. State Department under Hillary Clinton’s leadership, which made Cisco a finalist in 2009 and the winner in 2010 for a State Department award for “outstanding corporate citizenship, innovation and democratic principles.” (The program is State’s “Awards for Corporate Excellence.”) Although Secretary Clinton in her Hard Choices memoir criticized China’s Great Firewall censorship practices, Cisco’s involvement in the Chinese system of repression, which even included scrubbing the accessible Internet in China of her own earlier comments about China’s treatment of dissidents, didn’t disqualify it for an award about corporate support of democratic principles.

Sirota and Cunningham-Cook note that at the time of the company’s involvement in China’s authoritarian firewall, Cisco was a significant contributor to the Clinton Foundation—somewhere between $500,000 and $1 million at the time, and now between $1 million and $5 million according to the donation ranges that the Clinton Foundation releases as its small step toward donor disclosure. Despite an investigative report by the Electronic Frontier Foundation documenting Cisco’s role in Internet repression and the filing of a lawsuit by the Human Rights Law Foundation concerning Cisco’s “key role…in the design, construction, and maintenance of China’s Internet surveillance system,” the Clinton Foundation nonetheless gave Cisco CEO John Chambers “a high-profile speaking role at its ‘Turning Ideas into Action’ annual meeting.”

Sirota and Cunningham-Cook point out other interrelationships between Hillary Clinton and Cisco, including former Clinton aides recruited as lobbyists for Cisco, political donations from Cisco employees to Hillary Clinton’s electoral campaigns, and State Department contracts that went to Cisco after the Clinton Foundation donations.

We suspect that corporations’ buying their way into the public’s good graces through Clinton philanthropic venues will be ignored by people who should know better. Cisco Systems isn’t the first and won’t be the last corporation that will be uncovered by industrious investigative reporters where the “firewall” between philanthropic activity, image-washing, and political influence will be found to be porous—more porous, to be sure, than China’s “Great Firewall” built with Cisco’s help.—Rick Cohen