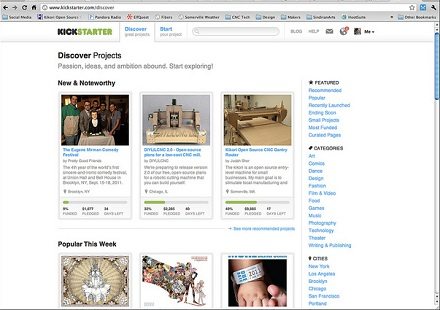 This week, NPR’s “All Tech Considered” posed an interesting question: “When a Kickstarter campaign fails, does anyone get the money back?” Kickstarter, as you may know, is the popular online crowdfunding platform that enables donors to make contributions to all sorts of creative endeavors—albums, films, new products and services, etc.—in order to get them off the ground. The creator establishes a funding goal and a deadline in an all-or-nothing funding system. If the fundraising goal is reached, everyone who made a pledge finds his or her credit card charged. If the creator falls short of his or her fundraising goal by the deadline, no one is charged.

The system has largely worked well, but as it has expanded beyond smaller projects like albums to multi-million dollar efforts such as designing a new video game console, the question arises as to what happens if the creator reaches their fundraising goal but then is not able to deliver on the proposed creation itself?

Kickstarter responded to the question raised by NPR with a blog post. In a nutshell, Kickstarter’s response was that creators are legally obligated to deliver on their promises once they receive funding, however Kickstarter doesn’t have the capacity to proactively issue refunds, nor can it guarantee that every project that someone might support will come to fruition. Kickstarter defends this model, writing, “The pursuit of these projects with a guarantee doesn’t work. A Kickstarter where every project is guaranteed would be the same safe bets and retreads we see everywhere else. The fact that Kickstarter allows creators to take risks and attempt to create something ambitious is a feature, not a bug.”

While the crowdfunding model has become more popular in recent years, it is still new enough that some of the practical details of how this all works need to be ironed out. Some crowdfunding causes—such as this call to help a little girl who suffered a terrible pit bull attack on crowdfunding platform Indiegogo—may result in something resembling a charitable contribution. Others, such as the aforementioned video game console, feel less like a charitable contribution and more like an investment. Who is attempting to develop a framework to address the many different forms that crowdfunding takes? –Mike Keefe-Feldman