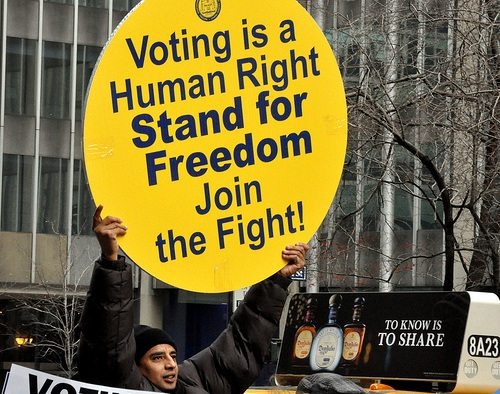 One doesn’t expect to see conservative billionaires Charles and David Koch manning a voter registration table outside the shopping mall, and you won’t, but you may see supporters aligned with their “independent” (of the Republican Party) political arm, Americans for Prosperity (AFP). Taking their cue from the politically liberal organizations that have succeeded in getting young people and minorities (who are both underrepresented in the electorate compared to their eligible numbers) to register to vote, the Kochs are aiming to recruit not young people or minorities, but potential voters “who share [their] small-government philosophy.”

Bloomberg says that the Kochs’ effort is “a project conceived in envy, as the Kochs watched another billionaire, financier George Soros, underwrite a 2004 Democratic voter-turnout project that operated outside of the official party.” Soros may be the Kochs’ political/philanthropic competition, but AFP’s aim is to become the political scene’s next National Rifle Association. That is, as the NRA is to gun rights, AFP will be toward the cause of small government.

AFP has opened offices in 34 states, staffed by 200 employees and scads of volunteers with digital devices (mobile phones and tablets). In addition, AFP recruits from its 2.1 million activist-donors for phone-banking sessions to entice potential voters that might be like-minded small government types to register to vote.

We wonder if this approach might spark a new outbreak of “do not call” filings. But if AFP gets people to register who weren’t registered and gets people to vote who planned to sit the election out, that will be all for the good.—Rick Cohen