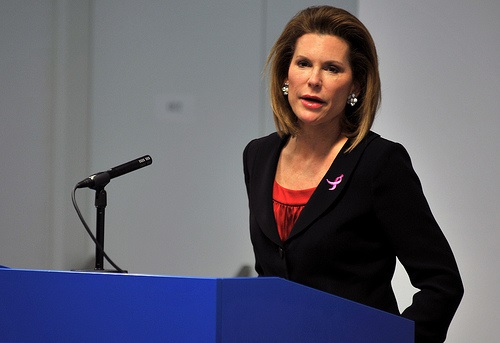 Nancy Brinker, the embattled founder of fundraising machine Susan G. Komen, published an op-ed in the Advocate this morning explaining why she signed on to an amicus brief arguing against the upholding of state bans on marriage equality, along with around 300 other Republicans. The case, an amalgam of four cases from different states, is due to be heard by the Supreme Court at the end of April. Other signatories included Sen. Susan Collins of Maine, Sen. Mark Kirk of Illinois, former Utah Gov. John Huntsman, former New York City Mayor Rudy Giuliani, and billionaire GOP donor David Koch.

Brinker, whose son is gay, writes:

“We are at a historical crossroads in America, when disparate political and ideological communities are committed to ensuring that discrimination on any level will not be tolerated. With this in mind, I have added my name to an amicus brief concerning government recognition of the freedom to marry filed with the U.S. Supreme Court by Project Right Side and former Republican National Committee chairman Ken Mehlman. A total of 303 Republican, libertarian, conservative, and center-right high profile activists and government officials have signed on to the brief. We want the court to know that we support traditional conservative values, including a belief in the importance of stable families, and that those conservative values are consistent with affording civil marriage rights to same-sex couples.

“Just as we’ve done for more than 30 years in the battle to end breast cancer, we must work now to end stigma and discrimination for those in the LGBT community and ensure that they are free to marry and form stable, loving families. Meaningful change is rarely easy, but it is always worth the fight.”

The brief was coordinated by former chair of the Republican National Committee Ken Mehlman, who organized a similar brief in 2010 but with less than half the number of signatories.

Brinker, of course, ran into problems as the head of Susan G. Komen, when the organization defunded Planned Parenthood. Though it subsequently reinstated the funding, the organization’s reputation and fundraising capacity was damaged by the machinations of the group’s leaders, including Brinker. She is still with that organization, though she has stepped down as its executive.—Ruth McCambridge