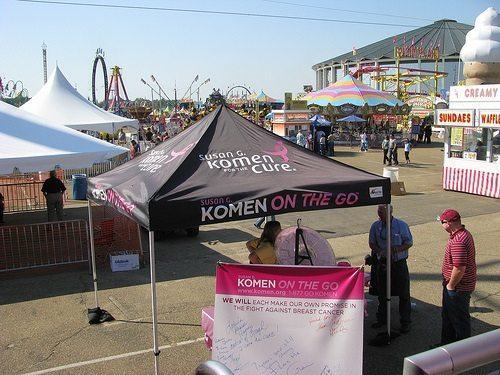 According to the audit recently posted on its website, the Susan G. Komen Breast Cancer Foundation booked $270 million in its fiscal year ending March 31, 2013, compared to $348 million the year previous and $367 million in FY 2011. This constitutes a decline of $77 million, or 22% of income. The interesting detail, found on page 4, is that the drop was most precipitous in the area of unrestricted “contributions, sponsorships and entry fees,” adding up to a full $100 million. The group also curtailed expenditures, primarily in the areas of research (approximately a $20 million reduction) and Public Health education (a $30 million reduction).

This news follows closely on a hasty announcement right before the New Year that founder Nancy Brinker had taken a salary cut of $159,000. As you may recall, Komen spent an indecent part of last year issuing tone-deaf statements about various issues, one of which was Brinker’s compensation in FY 2011 (which was when the Planned Parenthood snafu occurred—albeit towards the end of that period) of $673,000. Brinker also “stepped down” as CEO in an odd arrangement that has her remaining as a very highly paid core board member.

The Komen fall from grace, of course, started in January of 2012 when Komen announced it would no longer fund Planned Parenthood to do breast cancer screenings. An angry response to what was seen by many as a pandering political act took hold overnight. The organization then went on to make one bad communications move after another, many of which were seen as being less than forthcoming or (ahem) honest.

The result has been a slow falling away of constituent involvement. Last year, after finding that participation and revenue had fallen off significantly, Komen cancelled seven fundraising walks. The affiliates have also taken losses, as can be seen here and here.

Spokeswoman Andrea Rader is quoted as saying that the organization now is seeing its numbers stabilize remarking that even among people who were angry about the Planned Parenthood issue “They tend to say, ‘O.K., we were mad about that, but we’re not mad anymore.’”—Ruth McCambridge