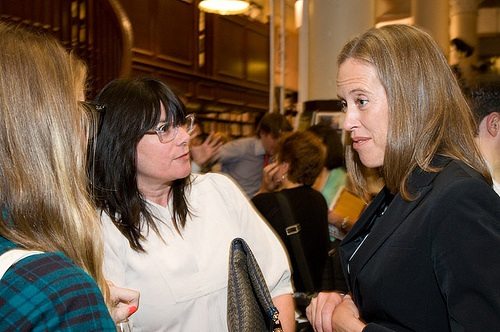 There’s a mayoral election coming in New York City to replace multi-billionaire Michael Bloomberg. At the organization’s annual fundraising gala in New York City, Teach for America founder Wendy Kopp assured New Yorkers, that no matter who next takes up residence in Gracie Mansion, Bloomberg’s educational legacy would be preserved and continued. “No matter who takes office,” Kopp said, “we are creating an unstoppable force.”

Kopp’s confidence that the nonprofit Teach for America’s “constellation of committed souls” will ensure Bloomberg’s educational legacy was underscored by its one-night fundraising total—$6.7 million—and the visible participation of big name speakers like Richard Parsons, the former Time Warner CEO who chairs the Education Reform Commission of Governor Andrew Cuomo. Parsons is a longtime TFA board member, but hardly the only TFA person with political clout in the Empire State or the Big Apple. For example, Matt Tepper, who’s the campaign manager for Christine Quinn—City Council speaker, and by many accounts the person to beat in the upcoming election—is a former TFA member.

What is the Bloomberg legacy that Kopp is so interested in maintaining? There’s no question he was a big fan of TFA, recruiting hundreds until the city’s financial constraints forced him to slow it down. But Bloomberg was a big advocate of charter schools, the vanguard of the “school choice” movement. Kopp herself is married to Richard Barth, CEO and co-founder of the Knowledge Is Power Program (KIPP), which operates a half-dozen or so charter schools in Brooklyn, the Bronx, and Manhattan.

Kopp, however, is widely seen as a visionary and sometimes talked about as a candidate for political appointments. Her name came up not only in New York a couple of years ago as a possible chancellor of the New York school system, but as a potential Secretary of Education under President Obama (who chose instead Chicago schools chief Arne Duncan, a vigorous proponent of charter schools). Her throwing a little political weight isn’t surprising, especially given TFA’s influence in the federal budget, getting significant chunks of funding from various agencies.

This summer, Kopp will be the commencement speaker at Boston University, but her presence has turned off some BU educators who have pledged not to show up for her turn at the dais. Education school faculty member Phil Tate announced his decision to bypass the commencement for fear that it would be seen as endorsing Kopp’s education views. In a response to BU Today, he penned his objections to Kopp and TFA, quoted here:

Is that the education agenda that Kopp assures the next mayor of New York City will pursue?—Rick Cohen