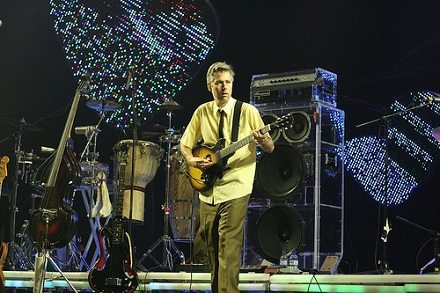 Hip-hop fans are mourning the loss of Adam Yauch, otherwise known as MCA, who passed away after losing his battle with cancer late last week. One of the three members of the Beastie Boys, Yauch will surely be remembered for his music and for his role in broadening the base of hip-hop’s reach. But Yauch was much more than just one of the first rappers to show that hip-hop did not need to confine itself to narrow racial boundaries. He was also the force behind the Tibetan Freedom Concerts that spanned a multitude of countries between 1996 and 2001.

At the Tibetan Freedom Concerts, some of the biggest names in popular music—from the U2 and the Red Hot Chili Peppers to Rage Against the Machine and A Tribe Called Quest—came together to perform in support of Tibetan social justice. In the liner notes to a 1997 compilation album of Tibetan Freedom Concert performances, Yauch explained that “the tricky thing about making donations is following up on how they’re used,” which is why, he wrote, the Milarepa Fund was created; the fund distributed proceeds from the concerts to support social justice activism in Tibet and the first concert alone raised $800,000. Yauch also expressed his hope that his young fans would help make a free Tibet a reality, noting that, because the Tibetan struggle was nonviolent, “truth it their only weapon.” “The youth of society have traditionally held the role of watchdog against injustice,” he wrote.

Explaining his motivation for starting the Tibetan Freedom Concerts to MTV, Yauch once said, “One thing Buddhism teaches is the only thing that brings us lasting happiness, that really makes us happy, is when we do things to benefit other people,” he explained. “Trying to make money, buy cool sneakers—those things don’t lead to any lasting happiness.”

While the Beastie Boys have often been skewered for their sometimes juvenile rap lyrics, Yauch clearly came a long way in his lifetime, finding a balance to the frat boy banter of “You’ve Got to Fight for Your Right to Party” with writing that addressed an aspect of the human condition that we think is particularly germane to those in the nonprofit and philanthropic sector: “To me, Tibet is significant because it represents a set of values that puts compassion for all other beings ahead of one’s own welfare,” Yauch wrote. “The more I’ve been exposed to that way of thinking, the more I’ve realized that it is a more logical, more intelligent way of understanding reality than the selfish principles we’ve grown accustomed to.” –Mike Keefe-Feldman