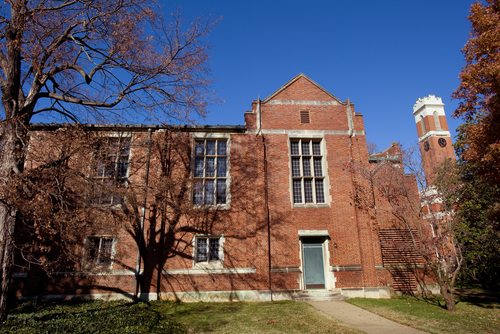 A former administrative manager at Vanderbilt University Law School was sentenced to 22 years in prison this week after pleading guilty in the theft of more than $535,000 from his one-time employer, in addition to charges of fraud and statutory rape. Jason Hunt, 34, was accused of using a university credit card for personal purchases and writing fraudulent checks, report the National Law Journal and the Nashville City Paper. After being placed on administrative leave, prosecutors say, Hunt opened a nightclub in Mexico with his partner. He reportedly returned to his native Arkansas after the nightclub failed, and he was extradited to Tennessee to face trial.

Hunt’s domestic partner, Samuel “Cole” Wakefield, 31, was sentenced to 10 years in prison. Both men pled guilty to theft as well as multiple counts of aggravated statutory rape. The men reportedly had a sexual relationship with two 17-year-old boys who cashed some of the checks. Both men will be eligible for parole after serving 30 percent of their sentences, and both will be added to the sex offender registry. Vanderbilt Law School officials started a two-month investigation in October of 2011 after receiving a tip about the missing funds. The money was stolen, prosecutors say, over an 18-month period from April 2010 until October 2011.

Regardless of an organization’s size, one hopes a theft of the magnitude of $535,000 over a year and a half required some pretty clever tricks to conceal. Not too long ago, such embezzlement and theft was often covered up to protect an employer’s reputation. This, of course, allows the culprit to move on to other organizations and steal from them. While those of us in the nonprofit sector may be dismayed by reports of thefts and convictions from agencies, it’s heartening to know that nonprofits are willing to suffer the notoriety associated with being taken advantage of by one’s own employees in order to stop offenders from wreaking havoc on other organizations. –Michael Wyland