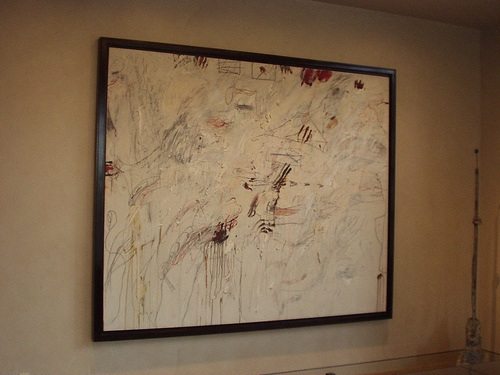 Cy Twombly was one of the 20th century’s most important painters, a post-abstract-expressionist in the mold of Robert Rauschenberg and Jasper Johns. Some of his paintings have sold for millions. Contrary to the image of the starving painter in a shabby garret, Twombly died leaving behind an exceptionally wealthy estate. The estate led to the creation of a foundation to promote Twombly’s reputation and art, but Twombly’s reputation as an artist may be in better shape than the foundation’s reputation as a financial steward.

A lawsuit alleges that one of the four people who staff the foundation, Thomas H. Saliba, took $300,000 in unauthorized fees. The charge is that Saliba, working with an art-world lawyer named Ralph Lerner, had Twombly’s artwork owned by the trust appraised at more than $1 billion, thereby padding the commissions Lerner and Saliba earn for administering the trust. The suit claims that the appraiser never really physically inspected the artwork and over-appraised pieces, including a $350,000 appraisal on a piece that Twombly himself had declared to be a fake.

Lerner is listed on the foundation’s Form 990 as the person in charge of the foundation’s books, which puts him in an interesting position. The lawsuit charges that Lerner and Saliba have been less than forthcoming about appraisals and other information. Allegedly, the foundation has been paying Saliba’s investment company for services, but that certainly isn’t referenced on the 990 and others say that the foundation never authorized such fees.

The result is a celebrity art foundation scandal, not unlike the controversies that have occurred with other famous modern artists such as Andy Warhol. The Twombly Foundation litigation shows a different world than what 99 percent of us ever experience as the world of philanthropy. Nonetheless, it is tax-exempt money. The rich and famous—and the people connected to the rich and famous—have an obligation to the taxpaying public when they are entrusted with the stewardship of foundation assets. We suspect that Cy Twombly would expect as much in the name of art and philanthropy. —Rick Cohen