A Lesson in Carbon Sequestering: How Dirt Can Help Save the Climate

We know that farming contributes to climate change: large-scale mechanization, monocultures, chemical fertilizers, and other practices disrupt natural cycles. But did you know that the simple act of harvesting plants for food affects how much carbon is in the atmosphere?

Plants trap carbon from the air for use in photosynthesis. They turn some of it into food, but they also trap some of it in the soil. As the dangers of climate change become more immediate, scientists are turning to this natural process as a possible way to mitigate the trend’s effects.

In 2006, Canadian soil scientist Henry Janzen points out that agricultural crops are a disrupted element of the carbon cycle.

“Grain is 45 percent carbon by weight,” Janzen said. “So when you truck away a load of grain, you are exporting carbon which, in a natural system, would have mostly returned to the soil.”

Scientists have experimented with breeding plants that put more carbon in the ground as a way to help keep it from the atmosphere. The conundrum is, if we breed plants to leave more carbon in the ground rather than use it as food to grow, does that mean our harvests will be smaller and less efficient? Will we help mitigate climate change only to create a hunger crisis? (Probably not; world hunger has more to do with distribution than it does with food supply.)

Still, less efficient harvests would create problems for famers, governments, and consumers. Jonathan Sanderman, a soil scientist in Australia, tested whether increased carbon sequestration led to lower yields. The results, published in January, concluded that the bigger the harvest, the more carbon ends up released. But those fields also had the most carbon in the soil. That means that the right crops could put more carbon in the soil.

[It] helps to think of carbon like money. We have an impulse to hide our savings under a mattress. But if you want more money, you have to invest it.

It’s the same with carbon. Life on earth is an economy that runs on carbon—the conduit for the sun’s energy. You have to keep it working and moving if you want your deposits to grow.

If more plants are grown, more carbon is pulled into the soil—we can feed people and promote natural sequestering at the same time.

A critical piece of the Australian study was that the high-yield fields were growing grasses. They do not have the heavy carbon eaters, big seeds, on top—so it’s not enough to just do more of what we’re already doing in the United States. One answer, might be to use more cover crops of grasses between planting seasons and on idle fields. Nonprofit organizations, such as Minnesota’s Land Stewardship Project, are discussing the importance of cover crops. In 2014, the National Wildlife Federation reported significant growth in the amount of acres planted from 2008 to 2013.

Many types of small farms cover crop grasses for haying, including farms that follow organic principles, those involved in the Slow Food Movement, and those operated by farmers who honor permaculture practices. Educational nonprofit farms like Moon in the Pond in Sheffield, Massachusetts, pay careful attention to keeping nutrients like carbon in the soil.

As in all things in agriculture, money is an obstacle. Cover crops alone cost a lot, and haying with usable grasses does not provide an adequate return. Rattan Lal, director of Carbon Management and Sequestration Center at Ohio State, estimated that the cover crop is $16 an acre.

Some companies have already started paying farmers to employ these techniques, says Roger Wolf, director of the Iowa Soy Association’s environmental programs. These corporations see a trend toward sustainability, with more of their customers pushing for environmental stewardship, and are trying to get out in front of it.

NPQ has addressed the trend of consumer pressure on for-profit corporations making them socially responsible; pressure like this on agricultural giants might encourage them to treat their off-season fields as carbon banks. On another front, the U.S. government provides huge agricultural subsidies for corn, soybeans, cotton, and others mainly grown by large producers. Would subsidizing carbon-sequestering grasses be a good way to bring more of America’s industry into the fight against climate change?

After hundreds of years of removing carbon from the topsoil, we are now concentrating on putting it back in. It is not the sole answer to climate change, but it is another significant puzzle piece that can be placed while feeding us at the same time.—Marian Conway & Erin Rubin 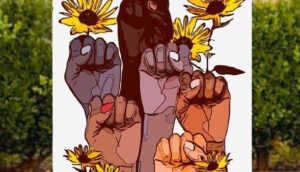