Lessons from E.F. Schumacher on the “New Economy” 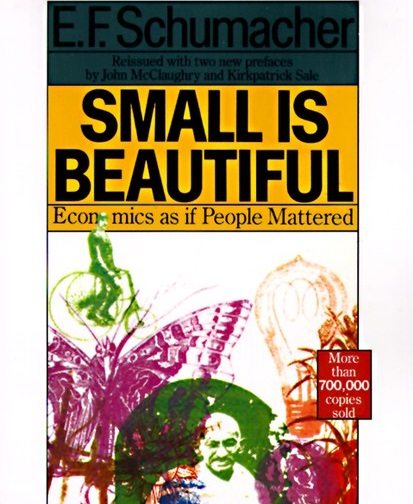 This past weekend was the 103rd birthday of the late Ernst Friedrich “Fritz” Schumacher. An economist and scientist, Schumacher has picked up an eclectic coterie of fans and admirers over the years, as evinced by the list of “new economy” speakers recommended by the Schumacher Center for a New Economic, including Hazel Henderson, Jeremy Rifkin, Frances Moore Lappé, Peter Barnes, and NPQ friend Gar Alperovitz. Among the luminaries who have delivered the annual E.F. Schumacher Lectures have been Benjamin Barber, Ivan Illich, John McClaughry, John McKnight, Van Jones, Bill McKibben, Kirkpatrick Sale, Winona LaDuke, and frequent NPQ contributing author Bill Schambra.

Despite the combined intellectual power of those luminaries from across the political spectrum, do Schumacher’s ideas have any relevance more than a century after his birth?

There might be some special resonance to Schumacher’s writings now, given the American preoccupation with size and scale as the measures of success and progress. Some people, like blogger Alan Archibald, think Schumacher clearly speaks to today’s problems, particularly from his Guide for the Perplexed—less well known than his iconic Small is Beautiful, but still full of impressive insights.

Archibald’s commentary on Schumacher addresses the economist’s framework for understanding the world, a meditation on “philosophical mapmaking” that some readers might find too arcane and conceptual for today’s nonprofit sector, focused as it is on getting things done in a practical manner. But Schumacher was a writer and thinker who could shuttle between the extremely practical and the conceptually broad.

While working many years ago as a very young researcher and all-around do-whatever-is-needed guy at a think tank, this researcher met Schumacher, along with other famous people who transcended their fields to be able to address questions of philosophy and life—speakers like Lewis Mumford, Kenneth Boulding, and Isaac Asimov, just to name a few. Whether one agreed or disagreed with the overall thrusts of their thinking, there was always insight to be gleaned from these people, even if one might have squirmed over some of their ideas.

In honor of Schumacher, consider some of these insights for their applicability to today’s nonprofit sector’s issues and larger questions of public policy and economics:

If you’re a regular reader of Nonprofit Quarterly in print and the NPQ Newswire and features online, you’ll quickly see the relevance of these quotes to issues that we frequently cover here: the obsession with scale, the abandonment of a liberal arts education by young people in the sector, the grossly inadequate nonprofit and philanthropic attention to rural issues, the preoccupation of many with quantitative measures, and the challenge of fighting for solutions to complex societal problems that seem resistant to any and all counters. Our recommendation is to remember Schumacher’s advice to put up your sail so that when the wind comes, you’ll be there to catch it.—Rick Cohen