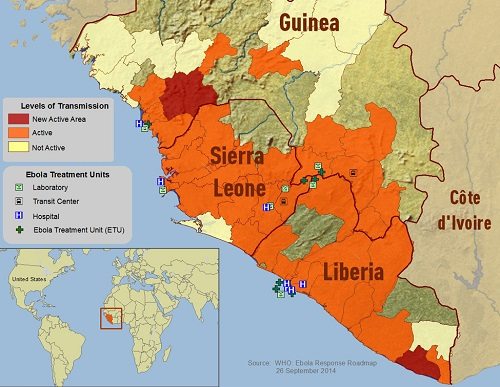 In an effort to gain control of the Ebola epidemic, Liberia, a country among those hit hardest by the disease, has had to temporarily shut its schools, universities, and public gathering places for the past several months. With little to do and barred from returning to school, Liberian students have been protesting in the streets of the capital, Monrovia, to release their frustrations in trying to find a way to help fight the disease. Monrovia is currently the epicenter of the virus’ outbreak.

In response, the Department of Children and Family, a small Liberian NGO, has been trying to mobilize this influx of students and direct them to nonpaying jobs to help with the efforts.

“We received the first 2,000 people and now we’re above 4,200 people,” said Department director Victor Fayah. “There is [sic] more people still coming in with their CV willing to go to all the counties, to go to the rural villages, to walk even, eight hours walk to get to some villages, to talk to our people in their language that they can understand, the best way that they can understand the issue of Ebola.”

Fayah felt that he and other individuals and organizations felt left out of the efforts being organized by larger health organizations, despite having a significant advantage being able to communicate with those directly that have been affected. Instead, Fayah’s NGO is helping these students and other Liberians get involved in the health initiatives and raise awareness of the disease.

More than 1,800 have died in Liberia. The Center for Disease Control announced on Tuesday evening the first case of Ebola diagnosed in the U.S., and the victim had recently traveled from Liberia. Most recent news indicated the patient had been in contact with some children while he was infected, further raising alarm in the West of the potential of an outbreak beyond Africa.

However, the CDC is confident that they will be able to prevent the disease’s spread in the U.S. “I have no doubt that we will control this case of Ebola so that it does not spread widely in this country,” said CDC director Tom Frieden.

“Time for panic? Absolutely not. This is a time to stay informed and follow the instructions of health professionals so they can ensure that the virus doesn’t spread.”

Liberia is in no such situation and continues to struggle with the epidemic, including an infected population that’s oftentimes unwilling to seek help. The country is currently facing an ambulance shortage that compounds the already exponential growth of the disease; many who fall victim do not receive treatment.

Yesterday, the United Nations Mission for Ebola Emergency Response announced that it wants 70 percent of those infected with Ebola to go to treatment centers within the next 60 days. Currently, fewer than 20 percent go to treatment centers, instead dying in their homes or on the streets, increasing the risk of infecting someone else.

With other regions like the Ivory Coast trying to prevent the infection from spreading to them and Nigeria apparently containing the outbreak, Liberia should use the help of its citizen volunteers to bring awareness of the treatment for Ebola to reluctant patients. Being able to communicate with other Liberians in ways patients can understand will help reduce further anxiety about the treatment and may be more effective than simply mandating that patients attend unfamiliar health centers, as the UN has proposed.—Shafaq Hasan