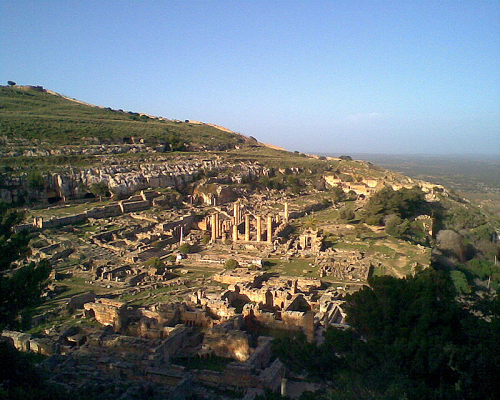 With the horrifying images still fresh from ISIS’s attacks last month on rare, precious artifacts and statuary in the Mosul museum, Newsweek is reporting that officials and experts around the world fear the antiquities of Libya are in imminent danger.

Stating that “ISIS holds an intolerance towards items that are deemed jahili (pre-Islamic) and antiquities that depict humans,” Dr. Hafed Walda, the pending deputy ambassador to the permanent Libyan delegation at UNESCO, has said “Their eyes are on big museums which have fine collections of Greek and Roman sculptures…. This, coupled with the fact that ISIS’s power has grown substantially in Libya, particularly along the Mediterranean coastline, has brought the group closer to sites of historical significance.”

Among the sites cultural and government leaders believe are most vulnerable in Libya are the ancient Roman theatre, Leptis Magna, just outside of Tripoli; the coastal town of Sabratha, a former Phoenician trading post with the remains of an amphitheater, temples and a basilica; and the archaeological site of Cyrene, considered one of the most impressive Greco-Roman sites in the world. ISIS militants have also proclaimed the city of Misrata, which houses a museum, a Roman forum, and a great basilica, as one of their primary targets.

Issandr El Amrani, director for International Crisis Group’s North Africa Programme, doesn’t hold much hope for securing the “completely unprotected” sites. He says, “ISIS is driven to a large extent by doing things that have a propaganda value more than a practical military value so, yes, they could be tempted to [attack the sites], to create the narrative that they are fighting anything that is jahili.”

Responding to the wreckage in Mosul, Iraqi archaeologist and associate fellow at the London-based Institute of Archaeology Lamia al-Gailani Werr said in an interview with Reuters that “the militants had wreaked untold damage” and that at stake was “not only Iraq’s heritage; it’s the whole world’s.” She and others have compared the devastation to the 2001 dynamiting of the Bamiyan Buddhas by the Afghan Taliban.

Other militant groups have done the same over the centuries, the Khmer Rouge in Cambodia, the Nazis in Germany, and many more. As has happened many times before, the motives are shock value, undermining the cultural identity and heritage of others and, more practically, for the monetary gain of the terrorizing group, selling what has been pillaged on the international black market.

According to National Geographic, “Experts outside of Iraq are now engaged in remote triage, watching the footage frame by frame and trying to create a list of the real artifacts that were destroyed.”

Those on the ground in Libya and who watch from around the world say it will take a massive joint effort to head off future violence. Newsweek Reporter Jack Moore concluded:

“As the North African country continues its slide into chaos, becoming a magnet for foreign fighters, and an embryonic extension of ISIS’s caliphate, there seems to be little hope for Libya’s cultural legacy. […] In the aftermath of the Mosul attack, UNESCO’s director general Irina Bokova told a press conference that the UN’s cultural body ‘does not have an army’ and ‘there is not much we can do’ to prevent the looting and damage of antiquities in war-torn areas. But, for Libya, Dr. Walda disagrees with Bokova, proposing tough security measures as a solution to protect his country’s rich history. ‘We have to fortify the museums,’ he says.”

Experts, including Al-Gailani Werr, concur, saying, “This as a cultural tragedy with a global impact. These things are part of the history of humanity. If you destroy them, you’re destroying the history of everyone.”— Susan Raab